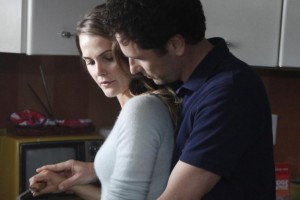 What you think you know, you don’t.

Taking place in Washington D.C. 1981, The Americans stars Keri Russell and Matthew Rhys as KGB agents Elizabeth (Keri Russell) and Phillip Jennings (Matthew Rhys), together in an arranged marriage with two children. They’re an attractive, professional-looking couple that, to outsiders, has everything going for them, but in actuality, no one knows their real identities – not even their children. The couple may have began their relationship out of convenience/necessity, but with the Cold War raging on and no immediate signs of peace on the horizon, they gradually come to respect one another and, better yet, fall for one another.

The teaser below may only be 30 seconds, but it’s some of the first new footage that has been released from the show, which was created by Joe Weisberg and will be co-executive produced by Graham Yost. In it, you get a taste of the mood of the show, a few key details signifying the time period, and a brief look into the minds of Elizabeth and Phillip. With their family bond strengthening, there may come a time where there’s a choice between their country and their children, once they’re called into active duty or faced with a pivotal piece of intelligence; if you had asked the two when their mission started what they’d do, I’m betting both would have picked their country, but now I’m not so sure.

In addition to Russell and Rhys, The Americans stars Noah Emmerich as Stan, the couple’s new neighbor and an FBI counterintelligence agent. Will Elizabeth and Phillip be able to keep their secret from him, protecting their county, their intelligence, their marriage, and their lives in the process?

The Americans will premiere in January 2013 on FX.

Will you be watching The Americans when it premieres? What do you think about the teaser below – did it make you more apt to give the show a try? What are you expecting from the show during the first season, if anything?