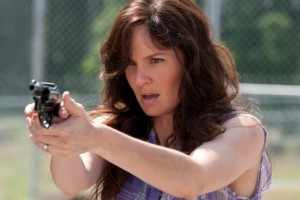 Everything about “Killer Within” was filled with tension, from the title to the prisoners getting antsy to Michonne’s increased distrust of the Governor. The Rick Grimes we know as a loving family man has become angry and suspicious. He hasn’t given himself even ten minutes to sit down and appreciate what he has left in the world; his son and his wife waiting to give birth. Considering the rag-tag group inside the prison, that there are two families with more than three members each is a sheer miracle. Until Lori smiled at him just before the walkers appeared, I feared Rich may never have that feeling of love again. As he screamed her name, he felt the love. Unfortunately, it was too little, too late.

The Walking Dead doesn’t pull punches. That’s why the show we started watching looks so different from the one on the air today. A world filled with zombies leaves a lot more dead than it does living. The clock was ticking tonight.

T-Dog was the man only man willing to give the two prisoners a second chance to blend in with their unique, tiny society. Like they were accepted at the farm, he realized they may have more blood on their hands than either of them. Nobody even knew why they were incarcerated, and asking wasn’t at the top of anyone’s list. For him to be revealed as one of the last bastions of humanity mere moments for his death was fitting, especially as Rick turned to the prisoners to find out why in the hell the walkers escaped in the first place.

When they reached the generator, Rick learned he was wrong to assume the worst of the prisoners asking for help. They found a killer within the generator room, another prisoner. Prisoner Caesar had the chance to shoot Rick in the head, but shot the prisoner instead. The Walking Dead is always full of surprises. You’d think Rick would have learned that by now.

I finally felt a connection with Michonne. Her aversion to The Governor was extremely pleasant. The way everyone bowed to him in a cult-like fashion was frightening, and I think it’s closer to the truth of an ill-fated future than everyone banning together in an attempt to free themselves. People like to be lead, and under impossible circumstances it’s easier to believe someone has the answers than to believe you’ll have to fight tooth and nail on a daily basis. Look how many people The Governor has compared to Rick Grimes. Michonne isn’t going to go softly into the night, if he lets her go into the night at all.

For all the practicing Carol did doing C-sections on the walkers, it meant nothing since Lori ended up trapped in the prison, unwilling to lose her baby with Maggie and Carl. Was the killer within her baby? Her strong goodbye to Carl wasn’t as heart wrenching as I would have expected, because they had all been through so much already. Lori was a mother first, and nothing was going to stop her from completing that mission.

“No more kid stuff. People are going to die. I’m going to die. Mom. There’s no way you can ever be ready for it.” Rick had already prepared Carl for something no child should ever have to face. To be a brother first, and a son second, but an adult above all else. Rest in peace Lori Grimes.