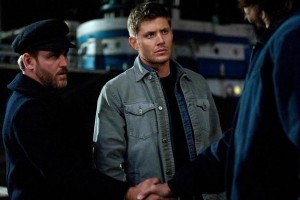 When I saw the episode was written by Ben Edlund and directed by Guy Bee, I should have known I was in for a treat. Honestly, after the absolute horror of “Bitten” I was a bit gunshy. “Blood Brother” put us right back where we belonged.

Since we met Benny (the always impressive Ty Olsson), I’ve wondered why in the hell he wore Naval gear. Don’t get me wrong, nothing sexier than a pea coat, but he seemed to be wearing it as if was inherent to his nature and not just a personal fashion statement. What an ingenious way to keep a vampire “nest” alive and kicking. By boarding boats and ships, feeding at sea and losing the bodies, you can pretty much keep yourselves covered for a very long time.

Learning about Benny, and what it meant to him to find a friend like Dean in Purgatory was really interesting. Not only did he trust him with his life, but he gave him a perspective once he came back to the world he wouldn’t have had without Dean. Sometimes I don’t think either Sam or Dean realize just how much influence they have on the lives of those around them. Benny fully admitted what Dean’s friendship did to him and how unexpected it was. 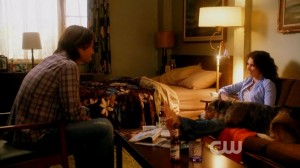 We needed to see more about Sam’s relationship with Amelia than fuzzy birthday party memories, too. Seeing him lost, wandering and hanging around one of their 70s inspired motels as a handyman to pass time made their story appear a little less idyllic. Sam and Amelia were both struggling and found commonality in an otherwise dire situation. It was amusing that she found his survival gear and lurking to be a bit creepy. Never mind the fact that he’s hotter than hades, she managed to latch onto the creepy factor. At least he saved Dog rather than carving him up!

It was interesting that Dean hadn’t mentioned Benny to Sam and even more so that I hadn’t noticed.  Was he protecting Benny or keeping the friendship for himself since he’s been confused about where he stands with Sam? In the same way Benny begrudgingly learned to respect Cas in Purgatory, I think Sam will find appreciation for Benny.

Benny finding the woman he loved and thought dead left him questioning everything he thought he died protecting and really threw him, just like watching Benny save Castiel in Purgatory made Dean question everything he knew about Vampires, and maybe other supernatural beings, as well. The slight gesture to Sam to keep it under control at the end opened up a whole new realm of story for the Winchester brothers.

They gave Kate a chance to live in “Bitten” and Dean knows first-hand that all vampires are not alike given his experience with Benny. What else have they misunderstood? Are there other allies to fight against the evils of the universe who are only classified demonic due to circumstances beyond their control?