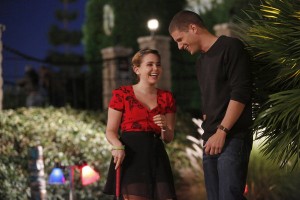 If you’ve been following NBC’s Parenthood this season, and you should be, then you know Amber finally found a beau worthy of her affections in Ryan, a vet recently home from Afghanistan. They met after Zeek introduced Ryan to the family as a way to ease him back into society.

According to TVLine, it appears Zeek might be the one who thinks Amber and Ryan aren’t the best match.

As a former vet  himself, Zeek knows fully well the realities of returning home after a tour of duty and is probably only thinking about what could go wrong. In my opinion, he also needs to take into account the large Braverman support system he has introduced to Ryan and the many resources available to both he and Amber should things start to go sour.

Amber has experienced many a bad romantic dalliance during the run of Parenthood, and this one has given us the most warm fuzzies by far. Given the dramatic nature of the show, does that spell doom from the start? Not necessarily. Parenthood has proven again and again how it deals in reality, and that adversity can be overcome with love and courage. The Bravermans provide plenty of reinforcements when the chips are down.