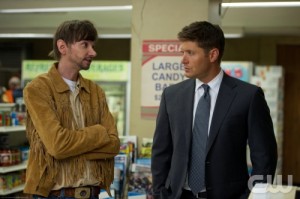 Are you ready for another exciting episode of Supernatural? Be ready for some giggles because I think the episode will be on the lighter side after some rather daunting, dark rides recently.

Garth (DJ Qualls) comes back for a visit on the next episode of Supernatural, “Southern Comfort.” He ruffles some feathers as he reminds Dean that Bobby wasn’t private property and more people miss him than Sam and Dean. It turns out that Garth has picked up where Bobby left off.

When Dean is noticeably upset at the idea of Garth assuming Bobby’s hunting duties, Garth points out that with Sam and Dean off the map, someone had to do it. In the clip, I especially love Garth using “ijit.”

Until I watched the preview, I didn’t even think of Bobby this season. As much as I enjoyed the character and Jim Beaver’s portrayal of Bobby, I almost feel as though it’s a betrayal of the highest order. He just vanished and I didn’t care. Garth cared more than I did. That sort of puts me into the same boat as Sam and Dean, doesn’t it? It will be interesting to see how the episode plays out and whether the guilt felt by Sam and Dean for so easily dismissing the memory of their friend matches my own.

Check out the clip and watch the episode Wednesday, November 7 on CW.