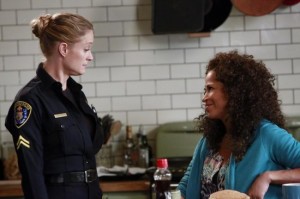 Lena’s soft heart is the reason that Brandon came to her instead of Stef to confess what happened with Dani; in fact, it’s the reason that she has five kids to begin with, as she felt so strongly about Jesus, Mariana, Callie, and Jude that she couldn’t turn them away from her home. Yet that sensitivity and compassion can sometimes get her into trouble, as her emotions are so strong that they can sometimes cloud her judgment, especially when it comes to her children. But what happens when she becomes invested in something that could forever change her family? Will she allow her emotions to dictate her decision-making? Or will she be able to tune all of that out and listen to the voice in her head?

Listed below are the dates, titles, and descriptions of the next three episodes of The Fosters, including the summer finale.

Monday, August 11th – “Leaky Faucets”
The Foster kids attend a Mexican street festival, but the fun day takes a turn when emotions flare up. With help from Wyatt, Callie works to overcome her recent bout of panic attacks by learning to trust her instincts, but an encounter with someone from the past threatens to violently derail her progress. Mat surprises Mariana with a date at the festival and is confused when Mariana seems offended. Jesus tries to impress Hayley but she wants him to prove he’s with her for more than just sex. Meanwhile, Mike and Ana make plans to right past wrongs.

Monday, August 18th – “Someone’s Little Sister” (Summer Finale)
In an effort to help Rita with a dilemma involving Girls United, Callie calls in a favor from her wealthy biological father, Robert Quinn. But an unexpected betrayal threatens to derail the new bond she’s forging with the Quinns. Meanwhile, the pressure Connor faces from his father to end his friendship with Jude intensifies and leads Lena to make a life-changing decision. The tension mounts between Brandon and Lou, despite their bandmate Mat’s warnings against drama. And a visit with someone from his past makes Jesus see his relationship with Hayley in a whole new light.

Will Robert decide to withhold on signing the adoption papers and keep Callie from being adopted by the Fosters? Should Jesus continue pursuing things with Hayley and has her manipulativeness kept her from being a viable romantic option? What will Lena do with regards to Connor’s situation with his father?