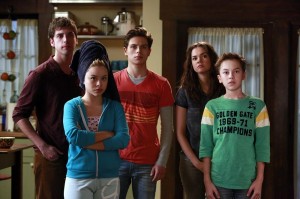 Emma and Jesus had to get through quite a bit before their relationship could even begin, as he was still technically with Lexi when they initially developed interest in one another and he attempted to go off his ADHD medication to no avail. However, Jesus and Lexi ended things relatively amicably and he soon realized that he needed to stay on his medication, so it looked like things were finally calming down enough to where his relationship with Emma could stand a chance. Adults couldn’t nurture a relationship in those kinds of conditions, so it’s a small miracle that Emma and Jesus are still together and trying to figure things out as they go. But just because Lexi is out of the picture doesn’t mean that their issues have ended.

On the second season premiere of The Fosters, Emma’s relationship with Jesus has finally begun impacting her position on the wrestling team, something she had been worried about in the past. She’s worked hard to win her spot on the team and has to push herself twice as hard as any guy on the team to earn respect, so she doesn’t need outside factors like her relationship becoming major talking points with her team members and giving them a reason to question her place on the team. The fact that Jesus is still so new to the team and doesn’t have as much leverage with the other guys means that he might not be sticking up for her as much as he should, something that will negatively impact their relationship and cause Emma to reevaluate whether she should be with him during the season. As much as she likes him, if it’s getting in the way of her wrestling and causing a disruption with the team, maybe taking a break would be the best thing for each of them.

Elsewhere on The Fosters, Callie’s future with the Fosters hinges on the revelation that Donald isn’t her biological father, while Mariana makes a big change that doesn’t go over well with her family, Brandon wrestles with guilt over sleeping with Dani, and questions remain regarding where Mike was the night Ana disappeared.

The second season of The Fosters is set to premiere Monday, June 16th at 9:00 on ABC Family.

Will Emma and Jesus be able to work through their problems and emerge a stronger couple? How long will it take for Callie to find her birth father and sort out her adoption status? Where do you think Mike was the night Ana disappeared?