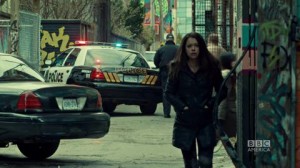 Rachel Duncan is used to being in control, to having the ability to bend the universe to her will. She has the money, the power, and the position to outrank damn near anybody that comes across her path and typically, they acquiesce to her demands. However, Sarah is the rare case of someone not intimidated by who Rachel is and what she’s capable of doing, somebody who’s left Rachel off balance and, frankly, annoyed at how she doesn’t have the upper hand. Thus far, Sarah has been able to safely keep her distance from the so-called Pro Clone, but on tonight’s episode of Orphan Black, her actions come back to bite her.

After discovering Daniel’s death, it won’t take long for Rachel to piece together that the clones had something to do with it, since the last she heard, he had captured Sarah and was bringing her back to the Dyad. Already looking at Sarah as a thorn in her paw, Rachel will then use the influence she has to make her “sister’s” life a living hell, thus setting her sights on Sarah’s loved ones. Sarah is nothing if not loyal to those in her inner circle, so the likes of Paul, Cal, Mrs. S, and the rest of the clones will have giant targets on their backs, making it easier for Rachel to strike against them. Not only will this allow Rachel to exact vengeance for the loss of Daniel, it can be used as leverage to get Sarah to stop running, stop fighting, and sign the contract, as she’s the last holdout among the clones. But will Sarah be able to come up with a plan to protect those she loves and further neutralize Rachel’s impact on their lives?

Which of Sarah’s loved ones do you think is in the most danger? Is this the point where Rachel gains an advantage on Sarah and uses it to force her into signing the contract? Should Sarah put her trust in Helena after what happened in Rachel’s bathroom?