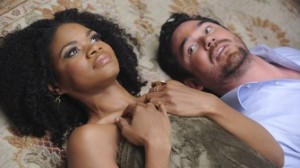 VH1 has released the first official preview from the second season of Hit the Floor, its hit dance team drama that became the number one new scripted series on cable last summer. When we last left the Devil Girls, Sloane had become the new director of the team following Olivia’s dismissal, while Jelena found herself single for the first time in a long time after being dumped by Terrence and Kyle was forced to deal with the complicated emotions that came with seeing her formerly incarcerated husband.

Jelena’s situation looks to drive much of season two, as she’s without Terrence to keep her grounded, Ahsha has proven herself willing to step up, and Sloane’s presence can only exacerbate the rivalry between the two premiere Devil Girls. Regarding the latter, Jelena thinks that Sloane will be an easier mark than Olivia, that she will be able to control the new director and remould the team to fit her vision when, in fact, Sloane is going to be much tougher to get one over on than Olivia ever was. Because Sloane’s primary reason for accepting the job was to protect Ahsha and she’s not going to let alone, not even the almighty Jelena Howard, throw her weight around this team and get away with it.

Hit the Floor will be adding four new series regulars for its upcoming second season, including Jodi Lyn O’Keefe (Nash Bridges) as Pete’s ex-wife Lionel; Adam Senn (The City) as Zero, a superstar traded to the Devils whose public image is far from his reality; and Brent Antonello (One Fine Sunday) as ambitious junior sports agent Jude, a young man looking to become the next Oscar Kincade.

The second season of Hit the Floor is set to premiere Monday, May 26th at 9:00 on VH1. You can check out a recap of the first season finale here.

Will you be watching Hit the Floor this summer? How do you think Sloane will do as the new director of the Devil Girls? Can Ahsha finally come out on top in her battle for supremacy with Jelena?