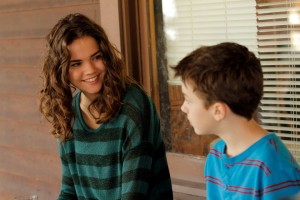 For years, Callie has made it her duty to protect Jude. Through all the poor foster homes they were forced into and the emotional damage they’re both still carrying around from what happened with their parents, Callie did her best to keep the two together and to shield him from the worst parts of living in the foster system. However, now that Lena and Stef have stepped into the parental roles they needed, she doesn’t have to be the caretaker for Jude that she previously had to be, not when he’s growing up and getting to where he wants to make some decisions of his own. But it’s one thing to let Jude assert his independence and it’s another to allow him to make major life choices without recourse, so is Callie going to get in the way when it comes to her brother reuniting with her father?

On the next episode of The Fosters, Callie’s interaction with her father has left her conflicted about her future and whether she wants Jude to reunite with Donald. Callie knows how good the situation she and Jude are in is and there’s a chance that, if Jude is allowed to see his father, he would opt to put a halt on the adoption, since he doesn’t remember as much about their father’s negative qualities as she does. But she can’t continue acting as Jude’s caretaker now that they have a healthy home life and even with the potential fallout that could come from Jude deciding to meet with Donald, she might be better off to let him make his own decisions. Callie’s had the time to process her father’s actions and the impact that they had on her life, but Jude needs to be able to see for himself the type of man that Donald is and get the closure that Callie thought she had achieved.

Elsewhere on The Fosters, Jesus struggles to pay attention in school without his ADHD medication, while Mariana gets an unexpected visit from Zac’s mother and Lena and Stef come to a major decision with the help of a good friend.

Should Jude be allowed to see his father? Will Jesus figure out a way to pay better attention in school without the use of medication? How will things be between Mariana and Zac the next time they see one another?