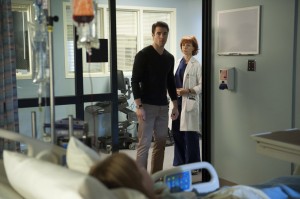 No matter how many setbacks Emily Thorne suffered in her mission for vengeance, she was always able to bounce back stronger than ever, a renewed sense of fire in her eyes. However, she has never been in the type of position she was at the conclusion of Revenge‘s fall finale, as her plan to frame Victoria for murder fell apart and she ended up with bullets in her stomach courtesy of an intoxicated Daniel, distraught over hearing that she lied about the pregnancy. Instead of riding off into the sunset to start her life over, her mission in her rearview for good, Emily has ended up in a hospital bed with no knowledge of who she is and without any real way of ingratiating herself back into the Grayson family. The point of everything she put herself through for the past decade has been about getting revenge for her father, but if she has no way of completing her mission, and doesn’t even know that she has a mission at the moment, what purpose does she have in life? Who is she without her desire for revenge?

Listed below are the dates, titles, and descriptions of the next two episodes of Revenge.

Sunday, January 5th – “Homecoming”
As allies and enemies scramble to learn what happened the night of Emily’s wedding, the Graysons close ranks to protect their own. But when everyone’s a suspect, it’s only a matter of time before they tear each other apart.

Sunday, January 12th – “Endurance”
Physically and mentally broken, Emily finds herself more lost than ever while her enemies circle closer. But one game changing revelation will ignite a new path of destruction.

What will it take for Emily’s mission to continue as it was? Can the Graysons keep it together long enough for any investigation into the events on the yacht to subside? Once Emily’s memory returns, is Daniel going to be her next take down?