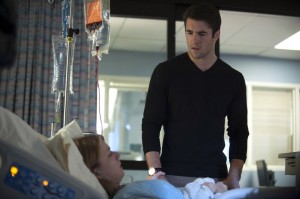 Emily Thorne has spent every day since she was released from juvie working to avenge her father’s framing and eventual death at the hands of the Graysons. She’s given every inch of herself to completing her mission, forcing herself to sacrifice meaningful connections and setting the roots to grow a life for herself in favor of strengthening her resolve and maneuvering her way into the Grayson home. It’s been a lonely life, but it’s been one with purpose, a purpose that was nearly fulfilled on the honeymoon yachting trip that she and the Graysons took following her wedding to Daniel. However, instead of framing Victoria for murder, Emily ended up with bullets in her stomach from the man she thought loved her – and no memory of what happened.

On the next episode of Revenge, Emily wakes up in the hospital after finding her way out of the ocean and has no recollection of either what happened on the yacht or who she is. Thus far in her journey to revenge, she’s overcome any and everything that stood in her way, dispatching all threats against her and outwitting those who underestimated her capabilities and desire to avenge her father’s memory, but right now, the key cog in Emily’s mission is missing: control. Emily has always either been in control of her situation or self-aware enough to know when someone had a (temporary) upper hand on her; this is the first time that she’s been completely helpless and in the care of a family who would like nothing better than to see her disappear for good. But can she somehow regain her memory and get back on track with her vengeance quest?

Elsewhere on Revenge, the Graysons close ranks to protect Daniel from a potential probe into the events on the yacht, but soon enough, the family begins self-destructing and their eldest comes in danger as a result.

What will it take for Emily to get her memory back? When she finally remembers that it was Daniel who shot her, how will she react? Are the events on the yacht going to reignite her hatred of the Graysons and desire to see them all fall to ruin?