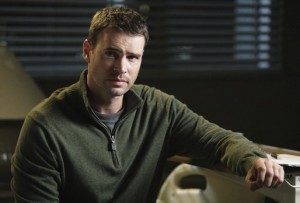 According to The Hollywood Reporter, Scandal has promoted Scott Foley to series regular for its upcoming third season. When we last saw his character, Captain Jake Ballard, he was being thrown into the same hole that B613 held Huck thanks to his refusal to turn on Olivia.

Given the nature of where he ended it, it seemed as if we said goodbye to Jake in the second season finale, so the promotion is a surprise, albeit a pleasant one. Foley quickly gelled into the world of Scandal and exemplified the show’s commitment to the gray area in morality, but you have to wonder how they’re going to plausibly bring him back while giving him enough to do to justify his new status. There’s a chance they could pull another time jump in the early part of the season and land after the shady organization freed him from captivity, making Jake’s arc about reassimilating into society and figuring out whether he’ll flee or fall in line with B613’s ideals. Another possibility is that the show decides to show his time in the hole, warts and all, considering that Huck’s own sentence was fit into one episode; mostly intriguingly, though, is the idea that Olivia could “fix” her father into letting Jake go, putting him back on the streets and potentially setting up a rekindling of their romance. Jake did Olivia a major solid in not turning on her when he had the opportunity to do so and she could want to do whatever she has to pay him back, even if it means getting closer to the man she thought she had left behind long ago.

Most known for his role as Noel Crane on The WB’s Felicity, Foley has also appeared on the likes of True Blood, Scrubs, and The Unit. He currently stars on FOX’s summer burn-off The Goodwin Games, which the network ordered at the 2012 upfronts before cutting its episode order from 13 to 7 and delaying its airing until summer.

Scandal returns this fall on ABC. You can check out the network’s full fall 2013 schedule here.

What do you think Foley’s promotion means for Jake’s third season arc? Will the character make it through the entire season? Is there a chance that, should he escape captivity, he and Olivia could rekindle their romance?