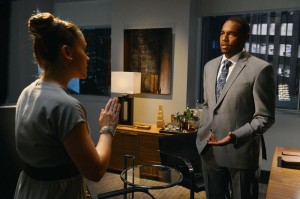 Although she wanted to come clean to Harry about her one night stand with Dominic, Savi decided to listen to Karen and take a beat before potentially ending her marriage. What likely stopped her from removing the weight from her chest is that they finally seemed to be on the same page about the state of their relationship and how their polar opposite schedules have negatively impacted their connection as a couple. Rather than demolish what little they built back up during their bedroom conversation last week on Mistresses, Savi decided to keep her secret and live with the guilt, even if it continues to eat at her and provide the wall currently separating her from April, who holds what Savi did against her after finding out about Paul’s secret life. But there’s somebody else that Savi’s actions impact – Dominic. Can the two manage to co-exist at work after what happened between them?

On the next episode of Mistresses, tensions have arose between Savi and Dom, adding to the headache that their night together has caused Savi. Her guilt and anguish at what she did manifested itself into a brief confrontation between the two last week and it’ll take either her telling Harry about what happened or Harry finding out on his own before she can breathe easily again; until then, things won’t be improving around the law firm, something that could have adverse effects on the Grey case. Not helping matters is the fact that Savi turns up pregnant after months of trying with Harry – and doesn’t know whose child it is. Will finding out the identity of the father inspire her to come clean to Harry?

Elsewhere on Mistresses, Joss’s new boss gives her an impossible task to complete, while Karen continues to find herself drawn to Sam Grey, despite knowing how inappropriate their time together is.

Do you think Savi should tell Harry about the fling, even if it would undo the progress they made last week? Why would you say Karen is so enamored by Sam? Will April be able to “forgive” Savi for what she did since she needs a friend to help her cope with Paul’s indiscretions?