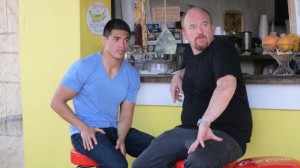 Guillermo del Toro’s FX pilot The Strain has added another cast member in Miguel Gomez, who is set to play a gangbanger fresh from juvenile hall after serving a sentence for manslaughter. The thriller, which has already added the likes of Corey Stoll (House of Cards), tells the story of the head of the CDC Canary Team being called upon to investigate a mysterious viral outbreak with the hallmarks of vampirism. The Strain is based on the trilogy of novels penned by del Toro (Pan’s Labyrinth) himself and has yet to be ordered to series, though that seems to be a technicality at this point.

-DirecTV’s first original scripted series Rogue, starring Thandie Newton (Crash), has been renewed for a second season of 10 episodes. The show follows undercover police officer Grace Travis as she works to bring down a criminal enterprise.

-Alfonso Ribiero will be the host of ABC Family’s upcoming game show Spell-Mageddon, the network announced Tuesday. The series uses distractions to try and break its contestants concentration as they are faced with spelling increasingly difficult words. Spell-Mageddon debuts Wednesday, June 26th at 9:00.

-WE tv has renewed Joan & Melissa: Joan Knows Best? for an eight-episode fourth season and Braxton Family Values spin-off Tamar & Vince for a ten-episode second season. The former will debut in early 2014, while the latter is set to bow Thursday, September 5th at 9:00.

-Among those slated to perform on the June 18th season finale of The Voice are Bruno Mars, Christina Aguilera (who returns as judge for season five), Pitbull, Florida-Georgia Line, Nelly, and Cher. Mars will perform his next single “Treasure” and there will be two duets (Aguilera/Pitbull on “Feel This Moment” and Nelly/Florida-Georgia Line on the remix to “Cruise”) before the fourth winner of the NBC ratings juggernaut is announced.

-OWN has ordered six new episodes of Iyanla: Fix My Life, which will debut Saturday, July 20th at 9:00, as well as 10 new installments of Kym Whitley’s Raising Whitley and 12 of La Toya Jackson’s Life with La Toya. The latter two will have their finales on June 15th and June 22nd, respectively.

-Due to disappointing ratings, ABC Family has shifted Dancing Fools to Fridays at 7:00 beginning this week, making room for two episodes of Melissa & Joey and Baby Daddy tonight. The former will air at 8:00 and 9:30, while the latter has back-to-back new episodes at 8:30 and 9:00. Here are the official episode descriptions:

Melissa & Joey – “Inside Job” (8:00)
Joe paints Mel into a corner, forcing her to get him a job at City Hall with fellow City Council member Paul (guest star Alimi Ballard). Once there, Joe gets wrapped up in another potential financial scandal, leading to all sorts of headaches for Mel. Meanwhile, Lennox is torn between her boyfriend Zander (guest star Sterling Knight) and her hot co-star in the school play, Archer (guest star Blake Michael).

Baby Daddy – “The Wheeler and the Dealer” (8:30)
Ben brokers an endorsement opportunity for Danny with a new brand of Japanese  energy drinks. Against Bonnie’s advice, Ben convinces Danny to sign the deal, but he must pick up the pieces when things go haywire at Danny’s commercial shoot. Meanwhile, Riley takes an interest in volunteering and accepts a job as a  candy striper at the hospital. She doesn’t feel like she’s really making a  difference, until a friend shows up in need of a little mouth-to-mouth.

Baby Daddy – “New Bonnie vs. Old Ben” (9:00)
Bonnie sets up her new bachelorette pad across the hall, and Ben and Tucker will do whatever it takes to force her out. They throw a huge party that threatens to  damage more than Bonnie’s new apartment. Meanwhile, Danny seeks Riley’s advice on how to break up with Milena. Instead he ends up in a compromising position, which Milena mistakes as a marriage proposal.

Melissa & Joey – “Can’t Hardly Wait” (9:30)
After a back injury lands Joe at the hospital, he asks out his cute chiropractor (guest star Marla Sokoloff). Joey thinks this could be really special and wants to take things slow, but even he doesn’t anticipate her revelation that she’s always taken things very slow. Meanwhile, Zander (guest star Sterling Knight) and Ryder decide to collaborate on a graphic novel together, but their fun is ruined when Lennox takes over as editor.

-HBO has released teasers for the next seasons of Boardwalk Empire and Eastbound & Down, as well as the series premiere of Hello Ladies. You can find out when they all premiere here.