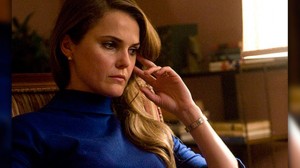 FX has announced that its newest drama now has a premiere date. The Americans, starring Keri Russell and Matthew Rhys, will be debuting on Wednesday, January 30th at 10:00, as American Horror Story: Asylum won’t be wrapping up until January 23rd at the same time. The later premiere date makes The Americans the final FX winter 2013 show to debut, as Justified will be returning for a fourth season on January 8th and the comedy bloc (including Anger Management, Archer, Legit, and Totally Biased with W. Kamau Bell) reemerges on January 17th.

Set in 1984, The Americans follows D.C. residents Phillip and Elizabeth Jennings, a seemingly normal, happy suburban couple with two beautiful children and a stable home for themselves. Except, all is not as it seems – Phillip and Elizabeth are KGB agents in an arranged marriage and their children don’t know their true identities. However, the two are gradually discovering that they have a real connection and their marriage has become a more genuine union, which will come into conflict with Phillip’s affinity for American values and the job that they’ve been sent into the country to do. Going into the arrangement, both agents were focused on doing their job and achieving the goals that their superiors had laid forth, but now, that doesn’t seem so important; can Phillip and Elizabeth get out of the game with their lives (and family) in tact?

In addition to Russell and Rhys, The Americans stars Holly Taylor and Keidrich Sellati as their children Paige and Henry; Noah Emmerich as FBI Agent Stan Beeman, who lives next door to the Jennings family; and Maximiliano Hernández as Agent Chris Amador, Stan’s partner and a fellow member of the Counterintelligence division responsible for fighting foreign agents on American soil.

Will you be watching The Americans this season? How long do you think the Phillip and Elizabeth will be able to keep their cover? After continuing to fall for one another, will they even want to continue in their current line of work after a while?