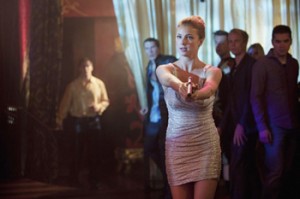 Honestly, I’m not down with flashback episodes. The have to be done very well to get my attention, and I think in recent years they’ve been overdone on television. That said, until the pieces started coming together on Revenge “Lineage,” I was a little bit bored. The payoff at the end, culminating with everything we learned really made it worth watching, so I’m glad I stuck with it. Let’s break it down piece by piece.

Emily (Amanda) and Aiden – Admittedly, I was surprised to learn Emily was the one to pull Aiden into Takeda’s world and they didn’t meet while he was already in it. Part of my skepticism about him and their relationship has been that I didn’t understand the power dynamic between them. It was a clever twist to throw the teenage Emily into the world of Aiden as he was seeking his own revenge on his sister’s kidnapping. She was quite the ass kicker, and I enjoyed the way he was telling her she needed to get out there and her retort that she could take care of herself. All very bored in shows and movies, really, but the Takeda edge and Emily kicking her way into the room to save Aiden was a fun way to get to know the trials Taikeda put Emily through before thoroughly helping her in her own revenge plot. Also cool she and Aiden bribed Takeda into taking Aiden into the Revenge School.

I have a new understanding and commitment in Emily and Aiden and their future together. I’m truly rooting for them. Together they are the only two people, other than Nolan and Takeda, they can sincerely trust. Emily sharing her double infinity box with Aiden and him calling her Amanda were cherries on the story. I do wonder as well, did Takeda put them together on purpose? Their families were both pawns in the downing of the jetliner and truly screwed by Dmitri and whoever was above him. That couldn’t have been fortuity. The only thing that I do find difficult as we move along is the more people know Emily as Amanda, the more difficult it gets to write about the character, because she really is two distinct people, as are the other Emily and Amanda. Do I have to start adding Fauxs to their names? And then which one becomes the faux? Tough stuff there people!

Nolan – Learning a little bit about Nolan and his company’s IPO was interesting for two reasons. One would be to pound the final nail into any doubt anyone might have of his loyalty to David and, therefore his daughter, Amanda (Emily!). Oh – an offside here – was the photo showed of David Clarke a different actor, am I losing my mind?  Giving Emily $500 million is astounding. The second thing we learned was what poor choices Nolan made in relationships. When his CFO and lover, Marco Romero, believed the news over Nolan, I was heartbroken for him. Nolan Ross is clearly one of the most intriguing characters on television. Gabriel Mann played the scene perfectly, with just the right amount of tears, as he defended his need to be trusted over newspapers and corporate giants. Now what on earth does Daniel want with Marco? Nolan does love a good CFO, doesn’t he? 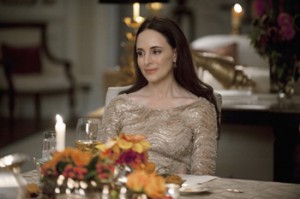 Victoria and the Graysons – Well. That happened. Victoria’s childhood was pure terror, and it wasn’t the kind where she got to skate away from it. Nearly indicted by grand jury for killing her mother’s boyfriend? She wasn’t kidding when she told dear old mom she learned from the best. As horrific as her childhood was, I wish her own life had turned out differently. Instead it’s always fraught with anxiety and mistrust. She ended up in situations nearly the same as the one she grew up in, which is a very sad statement on Victoria Grayson.

The thing I didn’t see coming was Victoria’s elaborate plan to get her mother dumped one final time. All to try to get some revenge of her own and put out the flame of hatred that had been haunting her for her entire life. Conrad didn’t have to ask if it helped, because you could see in her eyes that Victoria was no happier for having made her mother miserable than she was before the charade.

From what Conrad read of Daniel’s poetry, he should have let him become a poet. I guess it’s ironic that they’re now fighting their son’s takeover of the Grayson board, not because they don’t want him to lead the company, but because they’re afraid of what will happen to Daniel when he takes the wheel. Just who are these people lead by Helen Crowley? What is the initiative and it’s purpose?

The Porters – Six years ago The Porters were still being hounded by financial woes on the docks. All of their problems today started six years ago because thugs wanted “protection” money and nobody wanted to give it. Isn’t it funny that the protection money is always money to be protected from the very people who are asking for the money in the first place? Maybe not funny, but strange. A bastard thug gets killed being what he his, a thug, and six years later his sons are still causing problems. Question is, do Kenny and his brother know Carl Porter was the killer of their dad Joe?

So it was a nicely done flashback episode that I didn’t expect to quite so good. How about you? Did the background help with the story or would you have been just as happy to figure it out on your own?