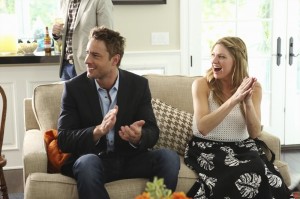 Until recently, Joss never allowed herself to lean on a man for anything. She ended relationships before things got emotionally complicated and she always held the men she was seeing at arm’s length, ensuring that she got the benefits from being with someone without any of the messy stuff that came along with them. However, Joss finally met someone she was willing to let her guard down for in Scott; he’s not someone that the Joss of 2-3 years ago might have gone for, but their relationship has done her a lot of good and recently resulted in an engagement ring being brought out. So why is Joss feeling so antsy?

On the next episode of Mistresses, Joss confides in April that she’s afraid of losing herself in her relationship with Scott, as he recently purchased a car for her and triggered anxiety about becoming financially dependent on him. Part of Joss’s attraction to Scott was that he was well off and that he wouldn’t need her for anything like that, but along with that security comes a view of money that Joss isn’t used to. While she had to scrimp and save to buy her own car, Scott can throw around enough to buy an even better car and still have an incredibly comfortable life; her anxiety is less about judging him for the way he does his business and more about how she doesn’t want to lose the independence she gained recently. She has a job that she loves and she doesn’t want to become complacent, giving up every bit of ambition she has in order to become the perfect doctor’s wife that she’s afraid he wants her to be. Will Joss be able to control her newfound anxieties and keep them from having a negative impact on her engagement?

Elsewhere on Mistresses, April deals with what she learned about Daniel’s true identity and the real reason he came into her life, while Jacob makes Karen an extraordinarily tempting offer and Dom dedicates himself to beating Toni at her own game.

Should Joss call off the engagement if she’s having this much anxiety over the direction of her relationship with Scott? Will April ever be able to get over what Daniel did to her and move on with another man? What type of offer do you think Jacob will make Karen?