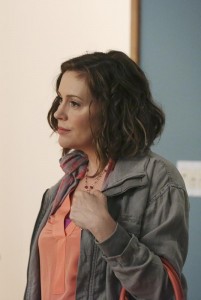 Rather than getting back together with Harry after the car accident that nearly ended her life, Savi decided to try out a relationship with Dom. It wasn’t the most popular decision that she’s ever made, but it was something that Savi felt like she needed to do given the circumstances and how the last few months of her marriage had played out. Yet their relationship hasn’t had the easiest time with Savi losing her baby, refusing to deal with the complicated emotions that came from the miscarriage, and befriending the man in the other car at the accident without telling Dom. For as much as she’s sacrificed for this relationship, could Savi have ultimately self-sabotaged her own happiness?

On the next episode of Mistresses, Savi and Dom’s relationship receives a major blow when his infidelity with Toni comes to light. It’s hard to blame Dom for feeling frustrated with the course of his relationship, considering that he put himself on the line by publicly “coming out” with her, but his cheating is no better than the litany of things she’s done wrong since the accident, especially since it was with someone Savi knows, doesn’t like, and doesn’t trust. While Savi might have been emotionally closed off following the accident, causing her to clumsily search for ways to better her relationship that ended up only making things worse, she never did anything to act out against Dom and the resentment that she feels about what he did is sure to negatively impact their relationship. But will it be enough to cause things to end between the two, even after all that they’ve been through?

Elsewhere on Mistresses, April learns the identity of the man who’s been stalking her, while Karen offers a helping hand to Anna that might be inappropriate and Harry plants seeds of doubt that Joss won’t measure up in the eyes of Scott’s extended family.

Do you think that Savi and Dom’s relationship is strong enough to survive infidelity? Could the man stalking April end up being an ally rather than an enemy? Why would Harry look to play into Joss’s insecurities right when she needs to be the most confident?