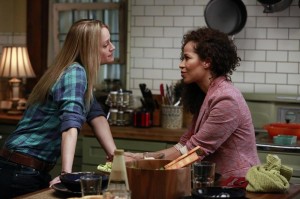 The amount of stress around the Foster home has been exceptionally high recently, with Brandon’s hand getting crushed, Mariana having to say goodbye to her first boyfriend, and Callie’s adoption status up in the air. While things may be getting incrementally better, the pain the family recently went through subsiding and everyone finding ways to move forward despite recent setbacks, everyone in the house needs a way to let off some steam and not worry about their biggest stressors for a night. While Lena and Stef take the opportunity to have a babymoon, using a window before the new baby comes to reconnect as a couple and spend some time alone, Jesus and Mariana end up throwing an all-night rager that could land them the most severe punishment either of them has ever been handed.

Listed below are the dates, titles, and descriptions of the first three episodes of The Fosters season two.

Monday, June 16th – “Things Unknown” (Season Premiere)
It’s a big day for Callie as her future with the Fosters hinges on the revelation that Donald is not her birth father. What happens next could threaten to separate Callie and Jude once again. Brandon struggles to recover and come to terms with his guilt over sleeping with Dani, and big questions still remain about what Mike was up to the night Ana disappeared. Meanwhile, Jesus and Emma’s relationship impacts Emma’s standing with her teammates, which causes tension between them. Mariana has made a big change, much to Stef’s dismay.

Monday, June 23rd – “Take Me Out”
Brandon contemplates a big decision that could either restore or destroy his dream of playing piano, but Stef and Lena find themselves on opposite ends of the debate. The Foster siblings plot to cheer Brandon up by taking him out to see a band and he butts heads with the sexy lead singer Lou (guest star Ashley Argota). Meanwhile, Stef confronts Mike about his whereabouts the night Ana disappeared. A mysterious stranger keeps tabs on Callie, and Callie is faced with a choice that could further complicate her life. An encounter with Connor’s dad creates a rift in Jude and Connor’s friendship. And Jesus begins to feel threatened by Emma’s independent spirit.

Monday, June 30th – “Play”
Stef and Lena go on a babymoon, leaving Brandon and Callie in charge of the house. Brandon’s bandmates pressure him into having a few friends over to hear their new sound, but when Mariana and Jesus find out, the night turns into an all-out rager. Determined to follow Stef and Lena’s rules, Callie tries to police the party but fails miserably. Jude finds himself in an awkward game of spin the bottle. Meanwhile, Lena tries to reconnect with Stef, who is finding it hard to relax on their weekend getaway.