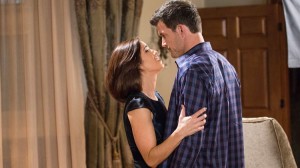 Marisol finally got what she wanted when Opal left town. Now she can move freely in her home with Nicholas and not have to worry about what happened in the past, especially now that the two got what could’ve been a stressful wedding out of the way. However, just because Opal is out of the Deering mansion doesn’t mean that Marisol’s problems with the help are over; she’s got to face the fact that she’s now the wife of a notorious Beverly Hills figure and accept everything that comes along with that. Marisol may get the prestige that comes with the Deering name and the quiet that resulted when Opal hit the road at the request of her son, but it’s time for her to find someone else to take over as maid and there’s no guarantee that the next housekeeper will be any better or any less stressful than Opal was.

Sunday, June 22nd – “Long Day’s Journey Into Night”
Marisol is shocked by a secret that Nicholas reveals, while in a pill-induced haze. Meanwhile, Rosie pledges to save Kenneth after a mysterious fall; Zoila forces Genevieve to face her mother; Valentina asks Remi to help Ethan; and Spence leans on Carmen when he gets some bad news.

Could Reggie be behind the mysterious fall that his father suffers? Will Nicholas reveal that he committed a murder before Dahlia’s death? Is now the right time for Genevieve to be facing her mother?