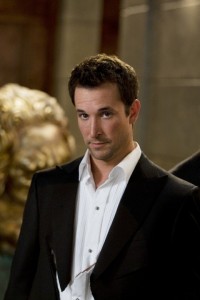 TNT is officially bringing back The Librarian.

The cable network has ordered 10 episodes of a scripted drama based off The Librarian film franchise, entitled The Librarians, and has tapped Rebecca Romijn to star.

Librarian crator Dean Devlin will return to the project to executive produce alongside John Rogers and Marc Roskin, who previously served as co-EP on the three films.

Noah Wyle, star of the TNT movie trilogy, will also be reprising his role as Flynn Carsen while also serving as one of the show”s executive producers.  This is in addition to his casino online regular role on the same networks” sci-fi drama Falling Skies.

The new series, expected to premiere in late 2014, will ceter on four people from around the world who are enlisted by Flynn to serve as “Librarians”: members of an ancient organization who are dedicated to protecting the world from the secret, magical reality of history.

Romijn will star as Eve Baird, a highly skilled counterterrorism agent, responsible for protecting the group.  John Larroquette will oversee the new team of Librarians as Jenkins, an expert in ancient lore.

Also starring, Christian Kane (Leverage) will play Jake Stone, an Oklahoma oil worker with a 190 IQ and encyclopedic knowledge of art history.  Lindsey Booth (Dawn of the Dead) will play Cassandra, a “quirky woman” with a special gift of auditory and sensory hallucinations linked to memory retrieval, and John Kim (The Pacific) will portray Ezekiel Jones, master of new technologies and expert of classic crimes.

Bob Newhart and Jane Curtin will also reprise their roles from the films for the series.