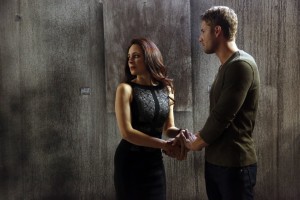 From the outside, Victoria Grayson looks like she has it all – seemingly endless riches, a gorgeous mansion, three grown children. She has a life of luxury and fortune that many can only dream of, but behind the scenes, the Graysons are hardly the picture of the perfect Hamptons family, dysfunction that has leaked into the public sphere more often the longer Revenge goes on. She’s trapped in a loveless marriage with Conrad, two of her children hate her, the family finances are dwindling by the day, and she continues to be haunted by the past that gave her Patrick. Since there’s nothing she can really do about the first three, is there a chance that Victoria finds peace with the events of her early life?

On the next episode of Revenge, Victoria confronts two formidable demons from her past with the hope of moving on from the trauma she’s experienced. While she’s never going to be the well-adjusted, zen Vicki that was lost all those years ago, she can start anew if she’s able to remove the biggest weights that are holding her down, preventing her from living life the way that she wants. As much as she’s been forced to compromise her sense of self for the good of the Graysons, staying with Conrad and continuing to fit inside the motherhood box that her children want to put her in, this is something that she has to do for herself in order to give herself the motivation to keep pushing toward a future away from the chaos.

Elsewhere on Revenge, Emily’s blackouts threaten everything and everyone she holds dear, putting her plans for vengeance against the Graysons in jeopardy.

How bad will Emily’s blackouts get before she finds the reason for their onset? Will Victoria be able to face down the demons from her past? Is Patrick going to be the support system that she so desperately needs at a time like this?