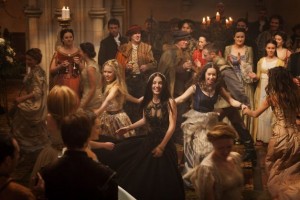 While in the middle of an Olympic-fueled hiatus, The CW has issued early renewals for the likes of The Vampire Diaries, The Originals, Supernatural, Reign, and Arrow.

“This season we’ve had great success with our new hit series The Originals paired with Supernatural, giving us our best Tuesday nights in years,” said CW president Mark Pedowitz in a statement. “The Vampire Diaries is No. 2 in its time period in the young adult demos, and with Arrow continuing to gain among young men, and Reign growing its time period, we now have strong nights on Tuesday, Wednesday and Thursday. I’m very pleased to announce early pickups for all five series, and let our fans know they’ll have more great drama to look forward to next season.”

Thus far this season, The CW is up 14% in the 18-49 demo vs. last season, as well as 3% in total viewers, thanks to a strong rookie class that includes The Originals and Reign. Without an early renewal are Hart of Dixie, The Carrie Diaries, The Tomorrow People, and Beauty and the Beast, though Hart and Tomorrow will likely have their fates decided after moving to their new nights later in the season. Carrie and Beauty are in more precarious positions, the former due to already concluding its second season and the latter due to a hiatus that begins next month and extends into May.

The CW will be unveiling its 2014-2015 schedule Friday, May 16th. It’s possible that additional early renewals will be granted, but it’s more likely that the fates of the shows mentioned will be revealed closer to the upfront presentation.

Which of Hart of Dixie, The Carrie Diaries, The Tomorrow People, and Beauty and the Beast will be renewed for next season? What type of shows would you like The CW to develop for 2014-2015? Are you surprised at how strongly The Originals and Reign have performed this season?