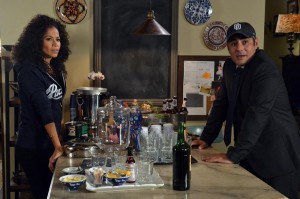 For quite a while, the Fosters have been faced with the cost of addition, their family, both extended and otherwise, growing and prospering. However, when Stef discovered that Frank had passed away while watching a football game, the family was brought back down to Earth, as they’re now forced to deal with loss in a way that some of them don’t know how. Death is a funny thing that brings out a range of emotions in people with otherwise similar world outlooks and on tonight’s episode of The Fosters, the family will be showcasing several different viewpoints concerning mortality, loss, and family.

While Stef is in denial about the tone of her final interaction with her father, likely hiding the guilt that’s eating away at her for the sake of the family, Callie and Jude are placed in a situation that they’re well acquainted with; the two may have lost their mother years ago, but they know the type of pain that their foster family is dealing with and the grief that comes along with losing someone you love. However, the two could end up being a major help for the rest of the family due to their experience and the familiarity they have with letting go of loved ones, a source of information on the grieving process that could get down on the level of Mariana and Jesus easier than Lena and Stef would be able to. But after the funeral is over and the guests have gone home, how will the Fosters be impacted by the loss of Frank?

Elsewhere on The Fosters, Jesus deals with his growing feelings for Emma and how they impact his relationship with Lexi, while Mike is troubled by new developments in the shooting investigation.

The Fosters airs tonight at 9:00 on ABC Family. You can check out a recap of the most recent episode here.

How will the family deal with Frank’s death? What will Jesus decide to do about his increasingly complicated romantic life? Will Stef ever be able to forgive herself for how things ended with her father?