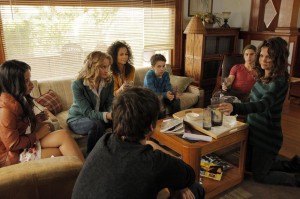 While Brandon gets ready for school and reads through the text conversation he had with Cole-as-Callie, Jesus talks with Stef about the hazing incident at school and how he was upset at Lena for embarrassing him in front of the coach. He claims that it’s just something that guys do before refusing the breakfast that his mother made, citing the fact that he needs to be in extra good shape if he wants to make it off the bench this season. As Mariana goes off to start her homework and begin serving her school suspension, Lena comes into the kitchen and reveals that she has a doctor’s appointment and that they really need Mike to get a move on fixing the Volvo. When Jude begins cleaning up the breakfast table, Lena and Stef mention that they want to move forward with the adoption and that he must decide if he wants them to adopt him without Callie, should she not want to return home.

For her part, Callie is over at Daphne’s new apartment, helping her move in and figure things out. Also there are Kiara and Rita, the latter of which catches Callie trying to use the landline in Daphne’s apartment to call Brandon. However, Callie claims that she was just testing the phone to see if it works. Elsewhere, Emma notices Jesus wearing plastic wrap under his hoodie and he informs her that he’s trying to drop a weight class in order to get off the bench, as the team doesn’t have anyone at that specific weight. As a result, he gives up his lunch for the day to her and she relishes eating his food in front of him, while Lena asks her doctor if she’s too old to get pregnant. She always wanted to have biological children before getting together with Stef and soon enough, their household filled up and the two got too busy to think about making that kind of change in their lives. Now, though, Lena’s curious about getting started.

That afternoon, Jesus texts with Emma about his diet, her sending taunting food pictures, and receives a selfie that Lexi took while in her bra. He takes his shirt off and lowers his pants trying to send one back to her, but Jude walks in and catches him and he inadvertently sends it to Emma. Jesus tries to tell Jude that he needs privacy and that whenever the red hat is on the door, he’s taking time for himself. Out in the driveway, Lena and Stef see Frank pull up in a new Toyota Prius that he bought for them; he tells them that since Lena’s parents helped the couple purchase the house, he should be the one to help them replace the car that broke down on them. However, Stef wants no part of the car due to her father’s views and the fact that he didn’t show up at the wedding, so she forces the keys back into his hand and makes him take the car back. That night, Lena tries to bring up the appointment she had with the doctor to Stef, only for Brandon to interrupt them to say that he wants to visit Callie with the rest of the family. He claims that he just got caught up in the moment when the two kissed and that he wants to put this entire thing behind them so they can be a family again, which Stef says they’ll put into consideration.

Brandon ends up going to Family Day at Girls United with the rest of the Fosters and the other girls at the home needle Callie about having her boyfriend visit her, being with her foster brother in the first place, and not even choosing the hottest one, as several are decidedly Team Jesus vs. Team Brandon. Callie meets with her family and explains to them what her life is like at Girls United before everyone has a late lunch that the girls prepared; she takes Jude out on the porch to catch up and he’s decidedly cold with her, even when she apologizes. He simply tells her that he’s going through with the adoption with or without her. At the same time, Rita asks Lena and Stef what brought on the idea of bringing Brandon to Family Day when they have a restraining order against him and when he’s the main temptation for Callie to get off track. They argue that it’s an issue they’re going to have to deal with eventually and that today will prove whether or not the two will be able to coexist in the same environment. Unfortunately, Callie never briefed them on the independent living program and her desire to be on her own, which Rita brings up to them.

Lena and Stef find Callie in the kitchen and broach the top of the program with her and while she thanks them for everything they’ve done for her and Jude, she says that it’s time for her to be on her own. When they get home, 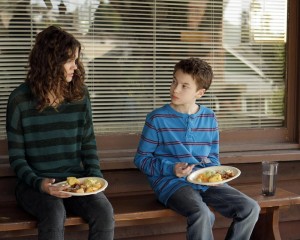 Stef rants about the idiocy of allowing a teenage runaway to make huge life decisions like that and wonders whether she’s doing it so she can be with Brandon. Upstairs, Jesus won’t let Jude come into the room and keeps him waiting outside the door for an hour, causing Jesus to throw a book at him in frustration. The reason Jesus needed alone time? So he could talk to Emma on Skype. While Lena and Stef take Jude downstairs and tell him that there’s no throwing things in the house, they’re both excited that Jude called the room “his room” and acted like a “normal” younger brother would with his older brother. Over at Girls United, Callie catches Cole outside with a baggie of drugs that turn out to be street hormones; since he’s under 18, doesn’t have his parents in his life, and wants to hurry himself into a LGBT home, he’s using a hookup he has to get illegal versions of the drugs, which he claims are exactly what he would get if he went to the doctor. Cole apologizes for being a jerk about the whole Brandon thing and Callie agrees to let him use the phone to call his hookup whenever he has to.

The following day, Brandon shows up at Daphne’s while Callie, Daphne, and Kiara are there. The latter two leave to go to the 7-11 and Brandon comes in to give Callie her guitar; they talk about what Callie’s life would be like if she gets accepted into the independent living program and he plays her a song on the guitar before they make out on the floor. When the girls return to the home, though, they see Cole being wheeled out by the paramedics and find out that he overdosed in the bathroom and hit his head on the sink when he had a seizure. At group, the girls turn on Callie, saying that she should have been accountable for Cole and how she’s yet to fully commit to the experience of being in the home. They also wonder why she’s even there when she has a family who loves her and wants her to come home. Meanwhile, Lena and Stef look up cars online and Lena tries to convince Stef that maybe she’s being too hard on her father. Stef argues that he thinks the car is going to make up for his ignorance and Lena mentions that ignorance works both ways and that in his mind, what he’s doing is right and just and the car gesture is something to meet them halfway. She then reminds Stef that Frank was asked not to come to the ceremony and Stef mentions that he didn’t come because he didn’t respect their relationship like she asked him to.

Rita finds Callie and says that she agrees with the girls, that Callie’s too afraid to commit to anything or anyone. She then tells her about how she cheated on her first husband because she was so insecure and didn’t think that she deserved to be with someone as nice as him, so instead of waiting for the other shoe to drop, she took the possibility of a good relationship away from herself. However, Callie mentions that she’s not Rita and leaves the room. Later, Cole comes back and tells Callie that his parents never showed up in the hospital for him, inspiring Callie to give up her phone and fully commit to being in the home. Meanwhile, Stef arrives at Frank’s to find him dead on his lounge chair while the game was still on.

Additional thoughts and observations:
-Brandon bringing his guitar to Daphne’s apartment, talking about the future with Callie, and serenading her was some icky, icky fan service that I thought this show was above. I was okay with the tension between the two during the summer season, but ever since the show returned from hiatus, it’s spent too much time on their dynamic and leaned toward painting them as forbidden lovers who should be together vs. two peers with a weird power dynamic that one of them is badly exploiting.
-Although I think it’s interesting that they’re using Jesus for a weight/body image storyline rather than Mariana, I’m already wore down by how issue heavy the show is and think that this will be another after school special-esque dead end for the narrative to go down. Bonus points for the sexting, though.
-I swear to everything, if Lena gets pregnant without telling Stef or, even worse, if the two decide that it’s a good idea to have a baby, I’m going to quit the show. For one, how in the world will they be able to afford that many children? For another, how in the world will they ever be able to spend enough quality time with each child they do have? The solution to making a family drama more interesting isn’t to add more children; it’s to write for those you do have.
-So, I was kind of offended by Lena defending Frank. I do think he had decent intentions by bringing the car to Lena and Stef and it seemed like he was ready to begin opening his heart to them, but for a gay woman to argue that “ignorance works both ways” was about as horrible a thing as I’ve heard on television in a while. Stef had many years of being drilled with her father’s bigotry and it’s understandable that she’s not going to fawn all over him when he buys them something extravagant, given how much her self-worth and the delayed acceptance of her own sexuality hinged on her father’s conservative views. That whole conversation felt like the show trying to show “balance” as far as viewpoint and instead, it was the most offensive thing they’re done thus far.
-Lena and Stef bringing Brandon to Family Day was idiotic. Having him and Callie interacting in a group setting that they can observe is somewhat understandable, but did they really believe what he said about getting the family back together after the way he’s been acting recently? All the dramatic outbursts, the professions of love? He may be a teenager, but it’s not like he’s Mariana’s age – he’s got something of a control over his hormones and feelings and he wouldn’t be able to make that sharp of a turn that quickly.
-Why can’t Cole wait until he was 18 to start hormone therapy? Why now? I know that he’s been born into the wrong body and all that, but he has a steady, comfortable living situation at Girls United and to put that in jeopardy due to impatience shows me that he might not be ready/able/mature enough to make the decision to go on hormones after all.