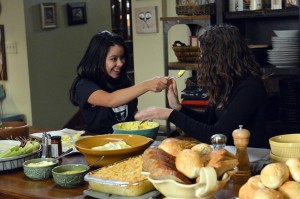 Stef has a dream that she’s in Frank’s house and he’s alive watching the baseball game. The two reminisce about a trip to Chicago where she saw her first snowfall and when Stef stands up, snow begins falling in the room and Frank disappears. The morning after she wakes up, Jude finds Mariana crying in the bathroom due to this being her first funeral and her not knowing the sense of loss that he does. He tells her about his mother’s funeral and the topic of heaven comes up, which Jude believes in somewhat. Across the house, Stef and Lena are getting ready for the service and the former is in denial about the last words she said to her father being in anger. When Lena exits the bathroom, Stef finds the prenatal vitamins that she got from the doctor after her most recent appointment.

Callie arrives for the funeral with the intention of comforting Jude and finds that he’s composed. The two walk hand-in-hand into the church similar to the way they walked into their mother’s funeral. After the service, the family comes home and puts on Padres gear for the reception. Before he changes, though, Jude calls Lena “mom” and asks her whether Connor could come over that afternoon, which she agrees to. After declining a glass of water, Callie looks at pictures from the wedding and Brandon says that he’ll never forget that day due to it being their first kiss, just as Mike talks to Lena in the kitchen about an article in the paper that mentioned the shooting investigation. However, he makes sure she knows not to tell Stef about it just yet before the two set up a poker table.

Callie goofs around with Mariana while they prepare food and she mentions that she’s not afraid of living alone; she’s mostly afraid for Jude after the way he took their mother’s death and she flashes back to the time he destroyed her room when they found out their mother died. Once the reception gets going, Stef points out to Sharon that the minister who gave the sermon at Frank’s service was the same one who gave her the talk about her sexuality when she was a teenager. The reason she got him to give the sermon? He was her dad’s minister and he would have wanted it that way. Brandon takes Callie up to his room and urges her to tell everybody that they’re together, except she brings up the awful timing and he backs down. Lena comes in to break them up and when she leaves, Callie stays in Brandon’s room for a minute and remembers the last time she saw her mother.

Downstairs, Mariana passes out Frank’s favorite flavor of licorice, Stef leaves the room when she sees Lena playing with a baby, and Emma shows up with organic noodle kugel for Jesus. She gets introduced to Mariana, who Jesus makes go away, while Stef takes Lena to the kitchen and confronts her. However, Lena changes the subject to the newspaper article and sends Stef flying at Mike; the two end up in another room and he tells her that the article is about police brutality in the city, with the entire last paragraph devoted to him and making it seem as if he murdered someone. As such, he’s not allowed back at work just yet.

While Callie goes to the bathroom and plays with her necklace, one of the things she got from her mother after she died, Lena tells Dana that part of the sadness that she’s feeling is due to Callie being there and acting as sweet and helpful as can be. She misses her and doesn’t know the truth behind her motivation for getting a new apartment; Lena also tells her mother about the appointment with the doctor, though Dana wipes it away as something that would have happened if it was going to. Upstairs, Connor, Jude, and Mariana play with a Ouija board and Mariana asks whether she’s going to have a boyfriend (the board says yes) and what his name will be (the board pointed to Z, which Jude thinks is Zac). When she leaves, Jude asks the board whether his mother is there (the board says yes) and whether it’s okay if Lena and Stef adopt him (the board says yes). Later, Stef gets short with Lena again and explains to Sharon that she knows about the vitamins. But the problem for her isn’t necessarily the vitamins; it’s the fact that Lena didn’t consult with her before making this decision.

As Mariana inquires to Brandon about the status of his relationship with Callie, Dana talks to Callie in the kitchen about the independent living program and tells her that family isn’t just until you’re 18; they’re for the rest of 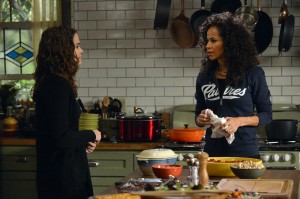 your life and Callie runs away. Lexi calls Jesus on Skype while he’s playing video games with Emma and Emma is the one who accepts it, as Jesus wants to just talk to Lexi later. However, Emma makes sure to stay in the frame and there’s a decided amount of awkwardness between her and Lexi. The cupcakes from the bakery come and they’re Dodgers instead of Padres, causing Stef to freak out and leave, but that’s not all the drama, as Callie realizes she lost her necklace. She panics and snaps at Lena before going outside to dig around in the dirt for it. Jude follows her out there and tells her that she’s scaring him with how similar she’s acting to the time she destroyed her room after they found out about their mother. She doesn’t remember that at first, but her memory soon becomes clear and it was indeed her who destroyed the room and not Jude.

Stef then comes outside and talks to Callie about how the necklace is not her mother and how her mother can live in through memories and experiences. Callie’s mostly upset about it because she never kissed her mother goodbye the night she died and Stef relates, saying that everybody experiences loss and the only way to avoid being brokenhearted is to completely close yourself off to people, which is no way to live. Before Emma leaves, she implies that she wants Jesus to kiss her, though he avoids the obvious tension between them by saying that he’ll see her in practice the next day. Stef runs upon the minister who gave the funeral sermon and expresses surprise that he came to her home; he replies that people can change their views, just like her father was struggling to do right up until his death. He argues that Stef should appreciate the fact that he would even want to change his views before leaving.

Captain Roberts arrives from the station after a call from the DA and informs Mike that he needs to lawyer up, as charges will be sought against him. Outside, Brandon presents the necklace that he found to Callie and she lets him down gently, telling him that while she loves him, she can’t be with him, not when she needs a family. He agrees, citing that he didn’t know how much she would have to give up to be with him, and the two go inside, where he plays a song on the piano in Frank’s honor. Stef goes outside to sit in the Prius and talks to her father, forgiving him for what he did and telling him that she’s going to miss him. Lena then gets in the car and Stef asks if she wants to have a baby.

Additional thoughts and observations:
-Emma is a shady, shady girl. You know that both Jesus and Lexi are probably having a difficult time with their relationship and that seeing a girl in his room is going to drive Lexi insane with paranoia and split the two apart. I mean, get yours, I suppose, but I wouldn’t want to get somebody by pulling something dirty like that.
-I really liked the opening dream sequence until the snow. And the snow at the end was Hallmark Movie of the Week-level cheesy. Also, what month is this supposed to be taking place in?
-If the show had ended on “Go Padres,” I would have a much better opinion of it, but that closing sequence just killed whatever good will I had for it.
-The flashbacks to Callie losing her mother were interesting and filled in enough of her backstory to be worthwhile additions to the episode, especially when the show highlighted the parallels between her experience and Stef’s experience and used that to bring them closer together. However, Callie destroying her room and then blocking that out of her mind felt a bit…melodramatic. In my notes on the episode, I questioned whether she had a psychotic break.
-I kind of wish they had Jude calling Lena “mom” in another episode, because it was almost a non-event in an episode as stuffed as this one was. The scene of him asking his mother whether it’d be okay for him to be adopted was astonishingly treacly and even more morbid (a Ouija board at a funeral reception?) until it was clear that Connor was the one moving the piece to give his friend the answer he wanted.
-Although I’m glad that the show cut off the Callie/Brandon romance, it managed to make Brandon seem even dumber when he suggested they tell everybody about the relationship on the day of his grandfather’s funeral. And during the summer season, he seemed like the smart, level-headed member of the family! I fear they’ve done so much character damage to him that I won’t be able to take him seriously when they put him in another storyline.
-Black licorice is gross. Sorry, Frank.
-Also dealing with character assassination: Lena, who throws a temper tantrum when her mother doesn’t celebrate her decision to have another child. And to beat that, Stef now apparently thinks it’s a good idea, too, because money now grows on trees and houses cost a nickel!
-Yet another product placement, this time a brief mention during the Ouija scene. Are we really going to have to deal with this every week? The show did well enough during the summer to where it shouldn’t have to shoehorn references to Kindles and Toyotas every episode.
-The fact that Stef was pushed to forgive her father by the minister was beyond insulting. What he said to her, that she should be grateful that her father tried to not be a bigot, was absurd. Her listening and responding to that was even more ridiculous. While I appreciate any and every minority ally out there, including those who overcome a past of ignorance and bigotry to become a more enlightened individual, bigots getting praise for making menial effort to not be bigots is such a bizarre concept to me and that the show validates it makes me insane. So what if Frank tried to challenge his fundamental beliefs for his daughter? She’s his daughter and if he was any kind of parent, he would realize that she’s more important than what he thinks a book says. Also, here’s a documentary that picks out every instance of what the Bible says about homosexuality and analyzes it. Worth a watch.
-Next week on The Fosters: Callie makes a bold change to better her future, while Stef testifies in Mike’s investigation and Mariana tries to make an impression on Chase.