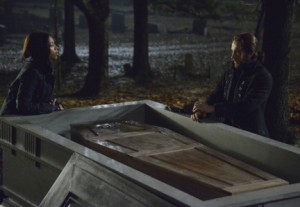 Now that Ichabod and Abbie have found the date within the pages of Washington’s Bible, they’re as close as ever to figuring out a way to bring Moloch down and further foil his plans of infecting Sleepy Hollow with evil. As such, Moloch, who knows about the defeat of Ancitiff at the hands of the blessed lantern, has even more motivation to terrorize the two witnesses and use all the underlings he can to come after the Bible. If he manages to gain possession of the text, with its coded messages meant to help defeat evil once and for all, Ichabod and Abbie’s time as witnesses will grow much more difficult, in that even if they figure out a way to emerge victorious against Moloch, it’ll likely already be within the confines of the Bible and he will have had ample time to defend against that kind of attack.

On the season finale of Sleepy Hollow, Ichabod and Abbie unearth the shocking true nature of Washington’s death thanks to the date they found in the Bible, but soon enough, they find that Moloch is closing in on them, ready to remove them from his path once and for all. In order to push him back and keep Sleepy Hollow from falling into the pit of evil that Moloch threatens to drown them in, sacrifices will have to be made and the increasingly strong loyalty between Ichabod and Abbie will be tested, though they’ll ultimately need the other one if they have any plans of making it through their time as witnesses alive. Will the two be able to keep the Bible from falling into Moloch’s possession and robbing them of the chance to save the town once again?

Elsewhere on Sleepy Hollow, Captain Irving makes a decision for the sake of his family that will drastically alter his future, while the battle of good and evil comes to a head.

The two-hour season finale of Sleepy Hollow is set to air tonight at 8:00 on FOX.

Do you think Moloch will come in possession of the Bible during the finale? What about Washington’s death will be so shocking? Are Abbie and Ichabod going to be able to emerge from this latest battle with their friendship (and lives) still in tact?