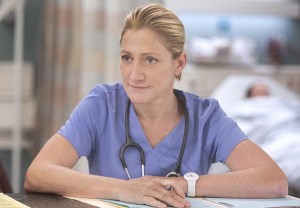 Showtime has announced that the next seasons of Nurse Jackie and Californication will premiere Sunday, April 13th at 9:00 and 9:30, respectively. Also set to premiere April 13th is 10-part docu-series Years of Living Dangerously, which will air at 10:00.

When Nurse Jackie returns, Jackie is back to using following her relapse in the fifth season finale, a relapse that took place on the one-year anniversary of her becoming sober in the first place. While there’s a chance that she’ll see the error of her ways and make her move toward sobriety, Jackie was still a decades-long addict, someone who learned how to lie very effectively and very persuasively, so it’ll take a lot for someone to A) notice that she’s using again and B) convince her that giving sobriety another shot is the best thing for her and the kids.

Meanwhile, on the final season of Californication, Hank has given up a world tour with Atticus and Faith to give his relationship with Karen another chance, but when he settles into his new job in the writers’ room of the Santa Monica Cop television adaptation, he’ll come face to face with the life of routine and comfort that he’s ran away from for decades. Is this the moment when the great Hank Moody finally packs it in for a life of domestic bliss?

Produced by James Cameron, Years of Living Dangerously takes a look at the hot button topic of climate change, as correspondents (film and television actors, news journalists) travel the globe to showcase the effects of climate change and talk to those who have been impacted by the global phenomenon. The series will also delve into possible solutions for climate change and whether Earth has reached the point of no return in terms of habitability.

You can check out the trailer for Years of Living Dangerously, as well as a new teaser released today, below.

Will you be watching Nurse Jackie this season after the relapse in the fifth season finale? Do you think that Hank will finally end up with Karen on Californication? What do you expect to learn from Years of Living Dangerously?