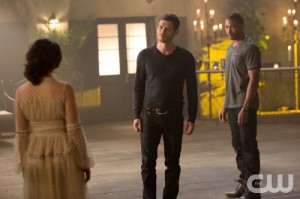 Ever since Klaus returned to New Orleans from Mystic Falls, he and Marcel have mostly been dancing around one another, a minor skirmish here or there whenever one thinks the other has become too powerful or too dangerous. While the two are still locking horns over control of the city and all those inhabit it, including the various supernatural factions that need an extra bit of leadership, it seems as if they’ve come to an understanding about their relationship on the next episode of The Originals. They might not wholly trust one another and they know that eventually, they’re going to have to have a final battle for the rights to the city, but for now, it’s better for them to form an alliance than to continue trying to destroy the other and lose focus on the city as a whole.

Although this could be the best thing for Marcel’s short-term survival, possibly allowing him to formulate a plan to attack Klaus that could play on his weaknesses, it’s not great for his relationship with Rebekah, which only recently looked to be on the up and up. Now, though, it’s decidedly broken, as Rebekah wants nothing to do with her brother or anyone who has anything to do with her brother, especially since she knows that Klaus’ jealousy won’t allow her the opportunity to take a lover. If she were to go along with Marcel’s new alliance with Klaus, it could have dangerous implications on the former King of New Orleans, Klaus chomping at the bit to bring down any and all of Rebekah’s suitors, so for his own good and to allow herself the chance to live life without Klaus, Rebekah has to stay away from him.

Elsewhere on The Originals, Davina attempts to free Cami from Klaus’ compulsion, while Sophie hopes to beat Klaus and Marcel to Davina, Hayley receives a life-changing phone call that forces her to make a decision, and Rebekah enlists the help of someone from Marcel’s past.

Who do you think will be the first to reach Davina? How long will the alliance between Klaus and Marcel last? What will Hayley learn that forces her into a tough spot?