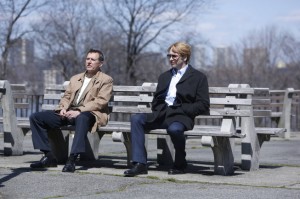 FX has announced that the second season of critically acclaimed espionage drama The Americans is set to premiere Wednesday, February 26th at 10:00. The show was recently named one of AFI’s Top 10 Programs of 2013 and was honored with major nominations at the Television Critics Association Awards and the Critics’ Choice Television Awards earlier this year.

The premiere date for season two is about a month later than the show’s series premiere was and will be nearly two months removed from the early January 2014 premieres of Justified, Archer, and Chozen. While there could be production issues at play, seeing as how the show only went into production for season two in late fall and might need the extra time to bank finished episodes, another issue at play is the Winter Olympics, which begin in February. Although The Americans is FX’s series premiere was the most watched freshman debut in network history, the show wasn’t a breakout hit in terms of live ratings, its renewal heavily influenced by strong DVR numbers and said critical acclaim, and would have a hard time finding its feet against programming that demands to be watched live.

The Americans stars Keri Russell and Matthew Rhys as KGB spies Elizabeth and Philip Jennings; Noah Emmerich as FBI agent Stan Beeman; Holly Taylor and Keidrich Sellati as Philip and Elizabeth’s children Paige and Henry; Annet Mahendru as Russian double agent Nina; Alison Wright as FBI secretary Martha; and Susan Misner as Stan’s wife Sandra. Season one guest star Margo Martindale, who is currently starring on CBS comedy The Millers, will be reprising her Emmy-nominated role in at least one episode this season.

Will you be watching The Americans this season? How strong do you think Philip and Elizabeth’s marriage is going into season two? In what way will the show bring back Claudia?