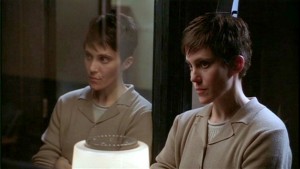 Deadline is reporting that Joanna Adler (Orange is the New Black) has signed on for a series regular role on Lifetime soap Devious Maids. She’s set to portray Opal, a cunning new maid who is said to be reminiscent of Mrs. Danvers in Alfred Hitchcock film Rebecca.

It’s unclear yet, though, who she’ll be working for and how she’ll be introduced into the world of Devious Maids. With the departure of the Stappards, the houses without a maid are the Powell’s and the Westmore’s, the latter due to Rosie being picked up by ICE in the first season finale, so either one would be an option for Opal. Evelyn made clear during the first season that she’ll do anything to find good help, so she would certainly take on someone like Opal, while Peri isn’t exactly going to go much longer without having someone to take care of the baby and would be willing to do anything she could to get a new maid/nanny under her services. But with the skeletons in their respective closets, would they be willing to take on someone like Opal, especially when there’s no guarantee that Rosie won’t be able to beat the case against her, make her way back into the country, and seek revenge on Peri for getting her deported?

In addition to her role as Chaplain Royce on the acclaimed Netflix prison dramedy, Adler has appeared on the likes of Are We There Yet, Chicago Fire, and The Good Wife. She joins recently cast recurring player Dominic Adams, who will play handsome bodyguard/chauffeur Tony.

The second season of Devious Maids is set to premiere in 2014. You can check out a recap of the first season finale, which resolved the mystery of who shot Flora Hernandez, here.

What do you think will be the central mystery of the second season of Devious Maids? Is Opal going to be the maid for a client we haven’t met yet or will she be brought into the house of a current series regular?