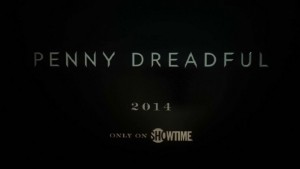 Showtime has released a new teaser for upcoming psychosexual thriller Penny Dreadful, as well as a production video that gives a behind the scenes look at the show’s beginnings. While the teaser doesn’t tell you anything about the show, except perhaps the tone for the eight-episode first season, the second video gives context for both the show itself and the name Penny Dreadful, which comes from 19th century newspapers that focused on occult and crime happenings.

Created by John Logan and executive produced by Sam Mendes and Pippa Harris, Penny Dreadful is said to weave together the origin stories of several classic literary figures, including Dr. Victor Frankenstein (Harry Treadway), Dorian Gray (Reeve Carney), and Count Dracula, in Victorian London. Specifically, the series will focus on the alienation that the “monsters” feel during a time of great change.

In addition to Treadway and Carney, Penny Dreadful is set to star Josh Hartnett as American Ethan Chandler, unafraid of violence and drawn into the darkest corners of Victorian society; Eva Green as enigmatic heroine Vanessa Ives; Billie Piper as Irish immigrant Brona Croft, who is looking to escape her troubled past; Timothy Dalton as African explorer Sir Malcolm, brought to London on a personal quest; and Helen McCrory as spiritualist Madame Kali.

Penny Dreadful is set to premiere sometime this spring on Showtime; a premiere date should be announced at the network’s January TCA presentation. You can check out an additional teaser for the show here.

Will you be watching Penny Dreadful? Do you think the show will mesh well with Nurse Jackie and Californication, the two comedies it’ll be paired with? Can Penny Dreadful manage to incorporate several classic literary characters and make the whole thing feel cohesive?