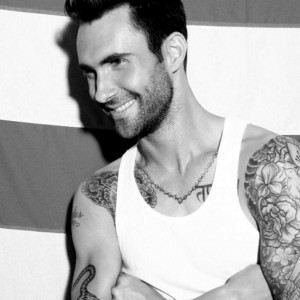 Recognized by his stunning looks, tattoos and amazing voice, judge of ‘The Voice’ and lead singer of Maroon5, Adam Levine is going to be named as the Sexiest Man Alive by the People’s magazine. According to an exclusive report by Gossip Cop, the renowned magazine will be revealing their choice for this title on November 20th.

Adam, who just got engaged to Behati Prinsloo, a Victoria’s Secret model was reluctant to answer any questions about this rumor on Friday’s Today show. Levine acted surprised when host Savannah asked him. He said this is really interesting but he knew nothing. Other honored candidates for the title of “Sexiest Man” include the very handsome Bradley Cooper, eye-candy, Channing Tatum and the dashing Ryan Reynolds.

Adam Levine has a major fan following not just because of his band Maroon 5, but is also popular for his acting roles in Can a Song Save your life? and American Horror Story. The Moves like Jagger star has also launched fragrance and fashion lines in his name. Only in the last month of May, Adam signed a one-year deal with the NBC, for a first-look development contract and the script picked out by the network was semi-autobiographical comedy. The show is centered around his friendship with Gene Hong, writer-producer and Community fame, who was Levine’s roommate in their struggling days, way back before either of them got popular.