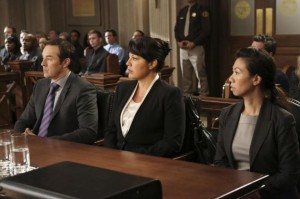 Sorry seems to be the hardest word is the 9th episode of Grey’s Anatomy Season 10. It’s a bad start of the day for Callie as she learns that she has been sued and has a trial in the court; just when she thought things were getting okay, life has so much else in store for her. I was shocking to see that our favorite Orthopedic surgeon, played by Sara Ramirez, was sued by one of her patients, Travis Reid, an Olympic athlete, who charged her for negligence in many of his surgeries, resulting which he lost both of his legs, which were his reason to live his life.

Let’s look at the surgery scene two months ago, when Travis asked Callie to build him a new hip, which would enable him to quality the Olympics. Where Callie was honest enough to tell him that she didn’t carry that kind of experience with her, she operated on him anyway. The twist comes when during the surgery, Reid’s heartbeat touched low levels, Callie hastily closed him up and left a sponge inside him, which led him to come back after a few weeks with a horrible infection! It turned out that Travis had a small heart murmur and his feet had started to turn grey. Christina contradicted Callie that she should operate him on first, but Callie didn’t listen to her and went on for his surgery. When she thought everything was going fine, the athlete’s feet started to turn black and Callie had no other option but to amputate both of Travis’ legs. What a pity!

Callie was a total mess in the courthouse, she was nervous and fragile but had her friends to support her, especially the scene with Arizona handing over a picture drawn by Sofia, was totally adorable. Christina and Jo were also called to the stand and testified not so much in favour of Torres. It was indeed a treat to see Travis’ testimony on the stand, it was so overwhelming that Callie felt incredibly guilty of what she did, he also claimed that Callie once confessed that she was guilty. When it was Callie’s turn to testify, she honestly said that she can very easily leave the sponge in again and it won’t be the cause of the infection, che also confessed that she was going through a tough time in her life, at the time of the surgery.

As it turned out, we were surprised to see that the verdict came in favor of Callie but a sigh of relief to Callie’s fans. Also, a good episode for Calzona fans as Callie’s father comforted her in this tough time and shared some words of wisdom. He confessed that before Callie was born he had once cheated on her mother and if she had not given her another chance, Callie wouldn’t be born. He advised her that one mistake and forgiveness strenghthens a marrieage. We are happy to see that Callie took his advice and shows up at Arizona’s place, tells her to come back home. Bad news for Leah, as Arizona tells her to get dressed and get out!

I think it was horrible. They never did another surgery to extract the sponge? They only noticed his legs were going black when they came for a routine visit? That "peterson joint" or whatever was STILL FDA-approved after the data from the discontinued trial came to light, and that data wasn't available on the net widely? And Callie, the surgeon who lost the patient's legs, teaching him to deal with loss? That's sadism, pure and simple. I think Callie was guilty, and I think she got to pay. Her "not guilty" verdict was quite unrealistic.