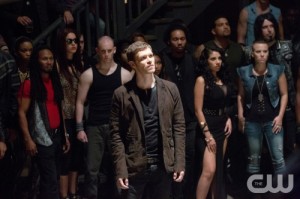 No matter what Klaus does and no matter how big the conflict between them, Elijah never stops loving his brother. It can be difficult to do, seeing as how Klaus has committed many a heinous act in his day and can come off like he doesn’t need anyone in his life, but Elijah knows the importance of family and how, at the end of the day, all he has are Klaus and Rebekah. Yes, Hayley came into their lives recently and there’s a chance that the baby isn’t just a way for Klaus to sire more hybrids, but Elijah has been through centuries with his siblings and developed the type of bond with them that comes with that level of life experience. It can come off like Klaus gets what he wants and never has to face the consequences of his actions; in reality, though, Elijah knows that he and Rebekah keep Klaus (mostly) in check and without them, he would be in a far worse situation than he is now. But is that concern for Klaus’ well-being going to inspire Elijah to seek his brother out and hope that they can patch things up?

Listed below are the dates, titles, and descriptions of the next two episodes of The Originals.

Tuesday, November 26th – “The River in Reverse”
Rebekah (Claire Holt), facing a difficult decision, turns to Father Kieran (guest star Todd Stashwick) for guidance. Elijah (Daniel Gillies) struggles with the consequences of a recent fallout with Klaus (Joseph Morgan). Hayley (Phoebe Tonkin) remains by his side but is soon drawn away by a mysterious figure who sheds some light on her past. Meanwhile, a frustrated Cami (Leah Pipes) struggles to make sense of a cryptic message she’s come across. Finally, when an unsuspecting Marcel (Charles Michael Davis) uncovers some upsetting information involving Klaus, a confrontation ends in a surprising twist.

Tuesday, December 3rd – “Reigning Pain in New Orleans”
Marcel, deeply conflicted by recent events, is surprised when Klaus opens up to him about some of his past indiscretions. Cami tries to make sense of cryptic messages she’s come across and is disturbed when she gains some insight into Klaus’ past. Meanwhile, in a surprising turn of events, the human faction takes matters into their own hands, resulting in a violent confrontation. Elsewhere, when Hayley learns of a plan to harm the werewolves in the bayou, she turns to Elijah and Rebekah for help. After heading to the bayou, they run into a werewolf named Eve (guest star Tasha Ames), who has information that leads them to a shocking discovery.

Do you think that Rebekah will turn on Klaus? What will we learn about the pasts of Hayley and Klaus? Is there a chance that Elijah seeks out his brother in hopes of repairing their relationship, even with the effects of the bite weighing on him?