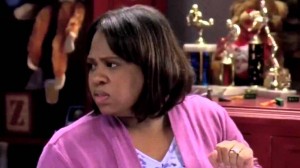 Two Against One is the 8th episode of Grey’s Anatomy Season 10. Well this one was very close to reality, showing the kind of stuff doctors have to give up to be the best at their profession. Sometimes it involves losing their senses and other times, losing their friends. Well, look how Meredith’s mother, the great Dr. Ellis Grey lost her life to Alzheimer’s and now it’s heartbreaking to see my most favorite character, Miranda Bailey loose her mind. And it’s not clear to her as well, she loses her focus in between a crucial surgery and then imagines things, while her hands freeze, what’s happening to her? Ben tries to talk to her but she is mad at him for throwing off his career like that, so won’t tell and keeps pushing him away.

On the other hand, Webber has found his old self back when his neighbor falls down during one of his laps and gets out of his damn bed and starts CPR on her. Richard tells April that back then he almost lost himself, which makes April to think that she almost let her fiancée break his promise and tells him that its better they wait to have sex after they get married. Everybody is excited for Meredith’s presentation on her breakthrough with the 3-D printer and she is trying to print a liver. Derek catches a guy during her presentation, who has an unstoppable twitch in his eye. He and Jackson work on the guy and during the surgery Shepherd tells him that it’s high time he gives the reigns to the 2nd year residents and not do every surgery by himself.

Owen’s girlfriend Emma is here at the Grey Sloan Memorial for an interview and Callie is excited to be on the other side of the table, chiefly because she will get to know her friend’s girlfriend better. At the end of the conversation and her talk with Arizona, Emma realizes it’s better not to work with Owen, because if something happens between them, everybody in the hospital would be on his side. Meredith is not herself after her argument of being a better doctor with Yang and that clearly reflects when she’s operating on a 14-year old boy, who is Karev’s patient and has multiple tumors in his body. Karev is not happy on her decision making in the OR and calls her a lousy doctor.

After a lot of persuation, Christina agrees with Ross that they can save their patient, a little baby’s life by using the 3-D printer to print a conduit for the baby’s heart. She requests Grey but Meredith is in no mood to be nice to her. Christina goes on to destroy Grey’s 3-D printed liver, without her permission , which we are sure, will leave a big hole in their friendship. But, I think Yang was being a better doctor there and did what she had to do to save a little baby’s life. Meredith, you really need to put the heat down!