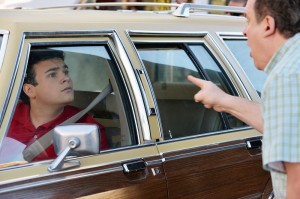 September 3rd, 1985 is a typical morning for the Goldberg family – loud father Murray; jazzercise-obsessed “smother” Beverly; Erica, the oldest of the three kids; frustrated middle child Barry; and Adam, who was given a camcorder and has been documenting the goings-on in his house ever since. It’s the morning of Barry’s 16th birthday and while Erica and Beverly argue over the former dating a college dropout and Adam complains about having to wear his sister’s hand-me-downs, Barry is excited about the likelihood of getting a car. However, inside the small, jingly box isn’t a set of keys that unlock the freedom that he’s been longing for – it’s a locket with Beverly’s picture in it, so he can keep it close to his heart.

Of course, Barry is upset and doesn’t flinch when Bev acts as if she’ll throw the locket in the garbage, hurting her feelings. Murray, meanwhile, remains disengaged and attempts to pick the mood by up by giving Barry the present he got him – an REO Speedwagon cassette. Except Barry isn’t into the top 40 music that the Sam Goody employee recommended. He’s into hip hop and as such, he storms away from the table, his birthday seemingly ruined. Before he can leave, though, his 80-year-old maternal grandfather Pops arrives in his new sports car and tells them that he’s giving Barry his old car, since Erica can get a ride from just about any guy in town with her looks. When he throws his grandson the keys, Beverly intercepts them and puts her foot down that Barry is too immature and high-strung to be driving, causing him to run back into the house.

Afterwards, Pops and Adam go to the House of Waffles to work on Operation Waffle Girl; Adam’s developed a crush on an older girl named Zoe who works at the restaurant and he’s been learning ways to attract her attention from his grandfather. Pops calls her over and Adam embarrasses himself in front of her, though she almost remembers his name. When she leaves, he has an imaginary light saber battle with himself in the middle of the restaurant and Pops takes him outside, where they find Barry sitting by the dumpster. He’s eating day-old donuts from the bakery his friend works at and obviously miserable at not being allowed on the road, but Pops has a plan to pick him up. Unfortunately, before that plan can come to fruition, the old man veers off the road and destroys the tables located outside a local burger place, as well as the columns near the drive-thru.

He’s then arrested for reckless endangerment and the three are taken to jail, where they’re held until Beverly can come and pick them up. She ends up taking away Pops’ keys when they get back to her house, despite his protestations and date with Shirley Nagle, a woman with 12 grandkids who he deems to be an easy lay. As he walks away, he tells Murray that he’s out of the will; later, Murray calls Beverly on her assertion that she’s not falling apart with the children getting older and manipulates his way into getting to take Barry on a driving lesson. Once Barry gets done breakdancing in celebration, the two hit the road, only for Barry to ride the breaks, accidentally turn on the windshield wipers, and hit Adam, who was panicking in the backseat. Barry claims that this is his one chance at learning how to drive and he’s not going to pass that up, so even when Murray forces him to stop the car in the middle of a busy part of town, he refuses to get out, rolling his window up while staring at his father standing outside. For 20 minutes, the two have a stand-off, which ends when Adam calls Beverly and she makes it into town. Instead of yelling at her husband or embarrassing her son, though, she simply tells Murray that this is his mess and he can clean it up.

Pops and Adam arrive back at the restaurant, where Beverly interrupts her son’s attempt to talk to Zoe and shuts down any chance of him getting into the dating world. She says that as someone who plays with robot toys and doesn’t have any hair under his arms, the 6th-grader isn’t ready to date, which causes him to storm out of the room and make a fool of himself in front of Zoe, who overhears him talking about her breasts. Once Adam leaves, Pops reveals why he was so against giving up his keys – it would mean less time with his grandkids, which is the best part of his week. Beverly then realizes that she’s going to have to let go a little. Elsewhere, Murray and Barry are waiting to pick up their vehicle and the elder Goldberg lets his son know that he relates to him. He knows how angry, let down, and misunderstood he feels, even if he doesn’t cry into his pillow like Barry does, and will do his best to convince Bev to let him drive. Or, well, get a hobby. They get back on the road and Murray puts in the REO Speedwagon tape, singing along and eventually being joined by Adam on the chorus to “Can’t Fight this Feeling”.

Murray finds Bev in the backyard, sniffing baby blankets while sitting on their swing set. It’s what she does when she feels sad and she admits to feeling like the kids are all she has, that now that they don’t need her as much, she doesn’t have anything. Murray tells her that that’s not true – he’s still there and he’s not going anywhere. He then sits down on a swing next to her and asks for a blanket to sniff, too.

Pops ends up cutting up his license and giving his keys to Erica before being dropped off at Hooters with Adam. Beverly relents and allows Barry to drive, gifting him with a key to the family car and a purple rabbit’s foot keychain. However, the first time he gets behind the wheel, he drives right into the garage door.

Additional thoughts and observations:
-“Car means freedom from all you monsters. I love you, mom.”
-“You’re killing your father. I hope you’re having a happy birthday.”
-“It’s called eating your feelings, ass-bag!”
-“Do you ever cry into your pillow?”
-There are two things that keep me from being extremely enthusiastic about what was otherwise a very good pilot – the yelling and the pop culture references. The former made the first 2/3 of the pilot have very grating moments, since it seemed like everybody was SUPER ANGRY ABOUT EVERYTHING, while the latter is more of a wait-and-see for me. If the show can use pop culture in the way that, say, That 70s Show did, I think it’ll be in wonderful shape, but if it starts to rely on the nostalgia and becomes live-action Family Guy, it might not be something to stick around for. That being said, I thought the pilot was pretty good at doling out the references and things like the REO Speedwagon sing-a-long make me hopeful that they’ll use pop culture to explore the relationships with the family.
-For those curious, among the pop culture references in the pilot were Karate Kid, Pac-Man, Sam Goody, Alf, Knight Rider, MTV, Simon, REO Speedwagon, Brooke Shields, and Star Wars.
-Troy Gentile (who plays Barry) was responsible for, I think, 85% of the laughs in the pilot. The way he runs, the breakdancing, the “no. no. no. no. no.” sequence in the car, his hatred of Simon, eating his feelings by the dumpster, taking a dump in the jail cell – all amazing. He was also in the scene that made me the most hopeful for the show’s future, where he got his father to open up and relate to him.
-The footage of creator Adam F. Goldberg’s real family at the end was a nice touch, though there seemed to be a lot of direct translation from his home movies to this pilot. Once the show finds its legs, I’m willing to bet that it’ll move away from that into events that simply make sense for the characters that have been established.
-The bleeped cursing: do you like it on network shows or no? I’m not a big fan, since I think it’s a very cheap way to get a laugh, but it didn’t bother me here.
-When I was in college, my town lost its Sam Goody and that was just depressing.
-Do you think we’ll get to see Shirley Nagle or will she be an off-screen character like Howard’s mother on The Big Bang Theory or Maris on Frasier?
-As always, this recap is testing the water to see what kind of interest there is in talking about The Goldbergs every week. If enough people click, I might cover it every week. If not, expect the odd recap here and there, in addition to sneak peeks and previews.
-Next week on The Goldbergs: Erica bucks against spending the first Saturday of the new school year with her father, while Beverly takes Adam shopping for new clothes. 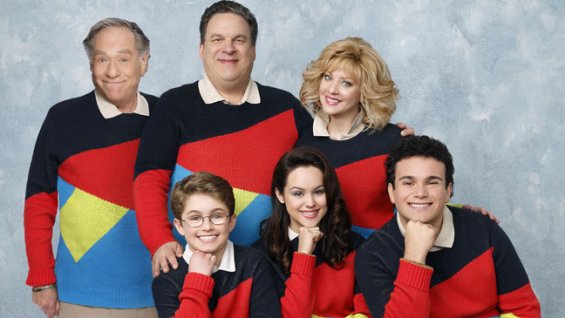