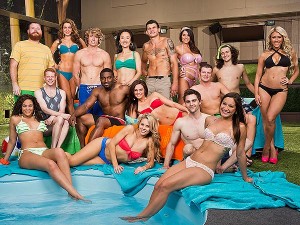 With Big Brother‘s 15th season winding down to a 90-minute finale on September 18th, CBS has announced that the reality series has been renewed for a 16th go-around, to debut next summer. Season-to-date, the show is +11% in viewers, +8% in adults 18-49, and +7% in adults 25-54 over last season and recently celebrated its 500th episode. Late-night companion series Big Brother: After Dark will also return for another season on TV Guide Network.

-Like to talk about television? Bravo has announced a new half-hour unscripted series titled The People’s Couch, which features real people watching and commenting on popular shows and news from the past week. The three-episode limited series will premiere Sunday, October 6th at 11:30.

–Community will begin its syndicated run on Comedy Central Sunday, September 15th with a 10-episode fan favorite marathon beginning at 11:30 a.m. The series, which is set to premiere its fifth season sometime midseason, will then move to its regular slot of Fridays at 9:00 beginning September 20th.

-National Geographic telefilm Killing Kennedy, starring Rob Lowe as President John F. Kennedy and Ginnifer Goodwin as Jackie Kennedy, will premiere Sunday, November 10th to mark the 60th anniversary of John and Jackie’s wedding. The film will then be released in 171 countries and 48 languages, timed to the 50th anniversary of the assassination.

-GSN has greenlit eight episodes of Skin Wars, a reality-competition series focused on finding the best body painter. The series will air sometime in 2014 and should be the second body painting-focused series on television, following the fall premiere of Syfy’s Naked Vegas.

-For its upcoming 13th season, American Idol has brought back Nominate an Idol, where friends and family members can submit videos of their loved one singing for a chance of a surprise audition. From now through September 20th, videos are being accepted on americanidol.com.

-MTV has greenlit two new drama pilots: Finding Carter, about a girl who finds out that the woman she thought was her mother abducted her as a toddler and must now return to her biological family, and Eye Candy, centering on a tech genius who uncovers a potential serial killer in Manhattan through online dating. Finding Carter is from Emily Silver (Bones) and Terri Minsky (Sex and the City), while Eye Candy comes from Jason Blum (Paranormal Activity) and Catherine Hardwicke (Twilight).

-Renewals/cancellations: We TV’s LA Hair has made it to a third season after becoming fourth most popular reality cable show in primetime and increasing its total viewers by nearly 60%; TLC has ordered another 10 episodes of Who Do You Think You Are?, executive produced by Lisa Kudrow and Dan Bucatinsky; TruTV reality series Container Wars will have a second season; BET has canceled Reed Between the Lines and given the second season go-ahead to Being Mary Jane, whose first season doesn’t premiere until January.

-The CW has acquired Canadian comedy Seed from leading independent studio Entertainment One. The series, which debuted this past February and follows a single bartender who becomes a sperm donor, will premiere sometime this season.

-Mekhi Phifer and Eliza Coupe have joined the cast of Showtime comedy House of Lies in recurring roles. Phifer is set to play a successful entrepreneur who calls on Marty to help with his business, while Couple will portray a wild-child heiress to an internet fortune.

-Lifetime has picked up a personal shopping-themed reality series called Million Dollar Shoppers, where three personal shoppers try to meet the fashion needs of their clients. The series premieres October 10th at 10:30 before moving to 10:00 on October 24th, where it will follow the season premiere of Project Runway All Stars.

-Nickelodeon animated series Sanjay & Craig has been renewed for a second season, the network announced Thursday. The tale of an excitable 12-year-old boy (voiced by Maulik Pancholy) and his snake best friend (voiced by Chris Hardwick), the series will have 20 episodes in its second season. Additional voices in the cast include Linda Cardenelli, Matt Jones, and Tony Hale.

-EPIX will air Schooled: The Price of College Sports on October 16th at 8:00. The documentary, narrated by Sam Rockwell, takes a look at issues surrounding the business of college sports and the NCAA’s treatment of its athletes.