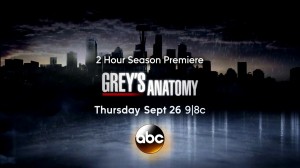 Things aren’t looking too good at the Grey Sloan Memorial, there seems to be a catastrophe and as in the trailer you can see a glimpse of earth-shattering destruction, shocked surgeons and a possibility of death! So, who is it going to be? As the hash tag in the trailer says ‘who will survive?’ a question which must be tormenting all of the series’ fans out there. The trailer starts with Callie (Sara Ramirez) highly upset and shocked and then Owen (Kevin McKidd) calling time of death (of who, Richard?) Derek (Patrick Dempsey) seems torn apart too, but Meredith (Ellen Pompeo) cannot be told about any of this as she is expecting a baby.

The catchiest moment in the trailer is when Bailey (Chandra Wilson) insists Christina (Sandra Oh) to help save a patient; else he’s going to die – yet again a possibility of the patient being Richard Webber (James Pickens Jr). And, we see Yang coldest as ever saying, “”I own this hospital. You work for me” which leaves Bailey in total dismay! Besides the chief, who, we know, was electrocuted in the finale episode of season 9, the unfortunate death can also be of Heather, who hits her head in the trailer or might be Lauren, who is murdered by a resentful Callie!

So, who do you think survives? Well, keep guessing until the 2-hour long episode ‘Seal our fate’ is aired on ABC and don’t forget to share your views here!

The first look of the exclusive trailer can be seen here:

Grey’s Anatomy Season 10 Premier will be showcased on Thursday, September 26th at 9 p.m. on ABC.