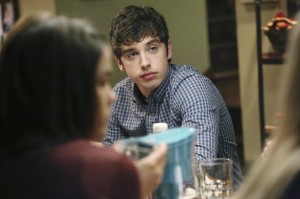 It’s dinnertime at the Foster house and while Brandon’s listening to the piece he’s been tasked with playing tomorrow, Lena talks with Mariana about what happened with Lexi and the kids are informed that Lena’s ex-girlfriend Gretchen is coming into town the following day. The landline rings, bewildering the cell-happy family, and Brandon gives the phone to Mariana. On the other line? Ana, asking about the money and the fact that her daughter has been ignoring the e-mails, texts, and calls. Mariana puts her foot down, insisting that she wouldn’t steal from her mothers, before hanging up on Ana.

Brandon’s time with his piano teacher the following day doesn’t go so hot, as he focused so much on getting each note of the piece correct that he took the feeling and emotion out. He’s told that being a risky player isn’t a bad thing to aspire toward and that in order to better himself as a musician, he’s going to have to face his internal pain. Problem is, Brandon doesn’t think he has that much pain inside. Meanwhile, Callie returns a book to Wyatt and notices that he’s very quiet and withdrawn around her due to what happened with Liam. She tries to tell him that there’s too much of a complicated history between her and her former foster brother, but he makes a crack about how close she is with Brandon and leaves. But not before informing her that she might be too screwed up, even for him.

Elsewhere at school, Talya approaches Brandon and presents him with two tickets to see The Weepies, one of his favorite groups. They were originally to be a present for their anniversary, which is the following weekend, but after their breakup and everything with Callie, she still wants him to do. However, he rejects her offer, claiming that he doesn’t want her to get the wrong idea. For his part, Jesus blows Lexi off to go with Mariana to Ana’s home and tell her, face-to-face to stop contacting them regarding money. Once he gets there, though, he’s overwhelmed at their first hug and seeing his birth mother living in a bad part of town with her tattooed boyfriend Evan, who she says is a temperamental, abusive drug addict. The money she has been after, while originally going to be for rehab, will now go toward a bus ticket to San Francisco, where she has a friend to stay with. Jesus tells her no, though, and leaves with Mariana.

Once they get home, he feels bad about having to say no, but Mariana thinks they did the right move. Their mother knows exactly what to say, she insists, and there’s no telling what she would ask for next if they continued to enable her. Later, Stef interrupts Brandon practicing to ask about Mike following an incident they had at work; during what was supposed to be a routine traffic stop, a guy elbowed a “tired” Mike in the face and fled the scene, only to be taken down by Stef before going completely off-grid. He mentions that his father is indeed drinking again and that he knew about Mike’s drinking while his parents were still married, not only from the intense fights they had but from an incident where his father ran off the road with him in the car.

The following day in Algebra class, the teacher leaves the room and a group of boys laugh in the background while watching a cell phone video. When Talya asks what the video’s of, they put it on the projection screen and it shows a drunk Talya taking her shirt off at Wyatt’s foreclosure party. Embarrassed, she runs out of the room and Callie follows, attempting to comfort her with the knowledge that her time as the gossip topic du jour would come to an end soon. Stef gets news that Mike’s been busted back to desk duty after a meeting with their superior and has to go to dinner with Lena and Gretchen immediately after. The dinner goes fairly well for Stef and Gretchen, who spend the time laughing at stories about Lena and being nostalgic, while Lena feels ganged up on when they pick apart her quirks and tell deliberately embarrassing stories. However, the three plan to have dinner together again the next day, only this time with all of the kids.

While Lena and Stef are gone, Callie and Brandon are hanging out in the kitchen and she tells him to give Talya a break, that the only reason she was drinking at the party was because she felt stupid over how she was so jealous over nothing. Brandon then asks if Callie’s together with Wyatt, which she doesn’t know, and why Talya would think that, the latter of which led to her realizing just how badly she had acted toward Callie over Brandon. Elsewhere in the house, Jesus interrupts Mariana’s homework to tell her that she was right about not giving Ana money and that he has a better idea: getting her into a (free) women’s shelter in San Diego. Mariana says no, though, claiming that if they were to do this, Ana would come up with a reason to ask for money for food, toiletries, or any number of things and would never be out of their hair.

Jesus also has to deal with an upset Lexi the next day at school, who is struggling with issues of her own after finding out about her immigration status. He assures her that she’s not alone and that he’ll do his best to make sure nothing happens to her. While he goes to Ana’s home the following day and runs into Evan instead of his mother, Callie offers to take Wyatt to a silent movie she has to attend for her photography class and he remains aloof, claiming that he has a “thing” to do that day.

Gretchen comes over for dinner and regales Lena, Stef, and Mariana with stories about Justin Timberlake and sharing a plane with George Clooney. (Mari is the only kid home that evening, as Brandon went to the concert with Talya and Jesus is seeing a movie with Lexi.) Talk quickly turns to marriage and the fact that Lena always wanted a wedding while she was with Gretchen; she didn’t get one due to Gretchen’s rejection of monogamy and affair with her best friend. Stef is upset that she didn’t know how much Lena wanted to get married, as she assumed that they both felt as if marriage was a state of mind vs. a matter of the state and that they didn’t need a piece of paper to prove how much they love one another. While tensions raise and Gretchen eventually bails on the evening, Mariana gets a text from Lexi, proving that she wasn’t with Jesus and that he lied about where he was. She tries to contact her brother several times via text and voicemail and there’s still no response, causing her to panic and tell Lena and Stef everything: how she was still in contact with Ana, how Ana had been asking about money, and how she and Jesus went over to her house, where he might be now.

While Wyatt eventually shows up to the theater after the feature starts, making up (and making out) with Callie as a result, there’s still no sign of Jesus and Stef goes to get her gun from the closet safe. There’s been no crime committed (yet), so she’s just going over there to get Jesus and quickly come back home. She arrives to the house shortly before Mike, who Lena called, comes for backup and the two enter, drawing their guns once they see drugs on the coffee table.

Once the camera pans out to show the house from the outside, there’s a series of gunshots and no indication of who got hit.

Additional thoughts and observations:
-Why didn’t Jesus and Lexi think of actually buying Ana the bus ticket rather than giving her the money? Of course, she could have scalped that and used the money to pay for Evan’s drugs, but they might have had a shot at getting her out of town and into the safe arms of her friend if they did that vs. rejecting the idea of giving her anything. Although I did like that their roles flipped and Jesus became the concerned one while Mariana noticeably hardened toward her mother after she started calling her at home.
-Speaking of, I liked seeing Talya be vulnerable. What happened to her in school was obviously awful, but everything with the tickets (and the coffee date they made at the end of the episode) made me like (and understand) her much more than I did before, when she was hell-bent on taking Callie out by any means necessary.
-Callie’s made a lot of emotional progress in her time with the Fosters, but is she evolved enough to be able to open up to Wyatt about Liam? If she’s not, I fear that their reunion will be short-lived, even if he does like her sense of mystery.
-When Gretchen came over, where was Jude? Brandon was at the concert, Jesus was at Ana’s, Callie was at the movie, and Mari was at the dinner, so what was Jude doing? It would have been nice to have, at least, a throwaway line about him being at Connor’s or up in his room doing homework or something.
-It was interesting to hear more about Stef and Mike’s relationship, particularly from Brandon’s perspective. Minus a couple of family events/decisions, we only know how the two work together on the force and it helped fill in some necessary information about what kind of terms they left on and what impact the divorce had on Brandon.
-As someone LGBT, it was irritating (on a personal level) to hear Stef mention things like “domestic partnerships are the same thing” as marriage. It makes sense for her character, who doesn’t like a lot of wedding-type extravagance and who tends to be generally more conservative, but her opinions are misinformed and ultimately quite dangerous to a cause that still has a while to go before being completed. For those of you in the cheap seats, domestic partnerships are indeed not the same thing as marriage for a multitude of reasons and it’s the equivalent of a woman arguing against Roe vs. Wade.
-Nice to see Necar Zadegan, though, who looked lovely and brought some good energy to the show. She was one of my favorite parts of Emily Owens, M.D.
-Next week on The Fosters: Stef ends up in the hospital as a result of her trip to save Jesus, while Callie helps Brandon understand the perspective of a foster child and the secrets of the Foster children get exposed to their parents.