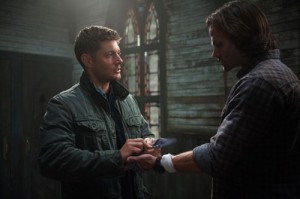 Warner Bros. has announced the 17 series they’ll be bringing to 2013 San Diego Comic-Con and provided the name of guests that’ll be appearing at each panel. In addition to the hefty rosters of shows that will be making the trek to the annual convention, Warner Bros. will be screening four pilots (Almost Human, The Originals, The Tomorrow People, and The 100) on Wednesday, July 17th, while there’ll be a 2400-sq. foot booth on the convention floor. As yet to be determined are panel locations/times and various activities for each session.

Warner joins Twentieth Century and ABC in announcing their Comic-Con lineups, the three combining to send over 30 series to the convention for fan interaction and special events. Other networks/production studios will be announcing their own lineups in the coming weeks.

The 2013 San Diego Comic-Con kicks off on July 17th (a preview night) and runs through July 21st.

Will you be going to Comic-Con this year? Which Warner Bros. panel are you most excited about hearing scoop from? Are there any shows not yet announced that you’d like to see make an appearance at Comic-Con?

The Big Bang Theory
Who’ll be there: Executive producers Steven Molaro and Bill Prady, as well as the show’s writers

Person of Interest
Who’ll be there: Jonathan Nolan, Greg Plagerman, and the cast

Revolution
Who’ll be there: Eric Kripke and the cast

Beware the Batman
Who’ll be there: Producers Glen Murakami and Mitch Watson

Teen Titans Go!
Who’ll be there: Producer Aaron Horvath and members of the voice cast