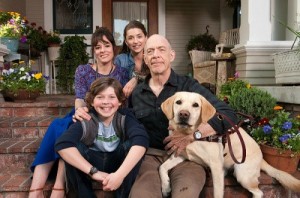 NBC has officially changed the name of midseason comedy The Family Guide to Growing Up Fisher. The series, which won’t debut until after the Winter Olympics, stars J.K. Simmons, Eli Baker, Ava Deluca-Verley, and Lance Lim as a family who gets brought closer together by divorce. Parker Posey was originally cast as the family matriarch but bowed out the day after the show was picked up; her role has yet to be recast, though Jenna Elfman is said to be a leading candidate. Growing Up Fisher will also feature narration from Jason Bateman, who plays the family’s son as an adult looking back on his childhood.

Growing Up Fisher isn’t the first series to be tinkered with this heavily after getting a pickup at upfronts. The likes of Deception, Ugly Betty, and The Chicago Code all underwent title changes following a series pickup, but Growing Up Fisher also has to deal with a significant recasting that could make or break the chemistry that earned it an order in the first place. The show has a pretty decent timeslot, as it will be squeezed in between The Voice and Jason Katims’ About a Boy adaptation on Tuesdays, and with family comedy making a strong impression in terms of pickups for next season, there’s a chance it could find an audience despite the turmoil.

NBC’s bid for family comedy, born from years of making niche workplace comedies that never attracted a wide audience, may also play a role in Growing Up Fisher‘s success. It make take audiences a while to associate this brand of comedy with NBC and something like Growing Up Fisher, which isn’t the highest priority at the network, could suffer in the interim.

Growing Up Fisher is slated to premiere Tuesdays at 9:00 this midseason on NBC. You can check out the network’s full 2013-2014 schedule here.

Does Growing Up Fisher sound like something you would watch? Is the title change a positive move for the show? Who would you like to see replace Parker Posey?