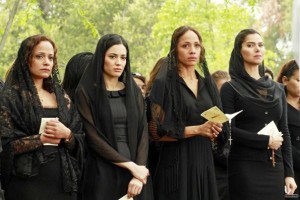 Marc Cherry’s Devious Maids will see the light of day two weeks before their official television debut. Lifetime has announced that the series will be available through multiple platforms beginning Sunday, June 9th, including myLifetime.com, the Lifetime video app, and A+E Networks’ distribution partners’ VOD services, sites, and apps. The series will be available in both English and Spanish, as well, making it the first time a show has been offered as a sneak peek in multiple languages.

Devious Maids is the rare case of a busted pilot being shopped to another network and actually making it to air. The show was in contention for a spot on ABC last pilot season, only to have its chances fall apart at the last minute and the likes of Nashville, Red Widow, and Last Resort squeeze in front of it. It was subsequently brought to Lifetime by ABC Studios, who produces the show, and will get to see if it can find life away from broadcast television.

Starring Ana Ortiz, Judy Reyes, Dania Ramirez, and Roselyn Sanchez, Devious Maids follows four friends who work as maids for elite clients in Beverly Hills. When another friend of theirs is found dead at the home of her employer during an important society function, they turn to each other for support, with one of them deciding to go undercover to find out the truth about the murder. The maids are used to seeing and hearing incriminating things about their clients, their silence being a part of the job description, but is there a chance that they could hear too much and have to pay for what they know?

The series premiere of Devious Maids airs Sunday, June 23rd at 10:00 on Lifetime, where it will follow the fifth season premiere of Drop Dead Diva. You can check out a promo for the show here.

Will you be watching Devious Maids? Do you like when networks release pilot episodes early? Is the show going to be able to find success on cable after being rejected by ABC?