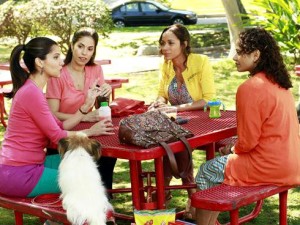 Lifetime has announced that Marc Cherry’s Devious Maids is set to premiere Sunday, June 23rd at 10:00. The 13-episode soap, inspired by the hit telenovela Ellas son la Alegría del Hogar, was originally piloted at ABC last year and was rejected in favor of the likes of Nashville, 666 Park Avenue, and Red Widow. It will be lead into by the fifth season of Drop Dead Diva, which was recently resuscitated by the network following an unexpected cancellation.

Devious Maids follows a close-knit group of five ambitious maids working for the rich and famous in Beverly Hills.  They’re bonded by their jobs, life struggles, and the gossip they pick up while being in the same room as some pretty high-up people – a bond that only strengthens when one of them turns up dead at the hands of her employers. The maids will then pool their resources and try to piece together the details behind the murder, hoping to get enough information to convict the culprits and find justice for their friend. But will the illicit affairs and deep secrets that will be exposed through their research change them forever?

Devious Maids stars Ana Ortiz (Ugly Betty) as newcomer Marisol, hired to clean the home of a newlywed couple with a complicated love history; Dania Ramirez (Entourage) as Rosie, a widow who works as the maid and nanny for a pair of successful actors; Roselyn Sanchez (Without a Trace) as Carmen, an aspiring singer looking to her pop star client for a career boost; and Judy Reyes (Scrubs) as Zoila, who works alongside her daughter Valentina (Edy Ganem) in the home of a wealthy society woman. Among the clients that the group of maids will be interacting with are Drew Van Acker (Pretty Little Liars), Susan Lucci (All My Children), Mariana Klaveno (True Blood), Grant Show (Swing Town), and Brett Cullen (Damages).

Will you be watching Devious Maids? Do you think that the show can stand up alongside the best of Desperate Housewives? Was ABC wrong in rejecting the show in favor of the drama pilots they did pick up?