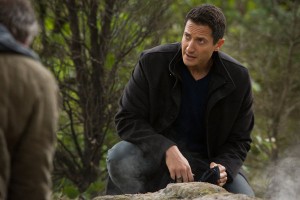 First. the network has canceled Ready for Love after two low-rated outings, giving the Tuesdays at 10:00 slot to sophomore drama Grimm. The supernatural procedural, which has performed solidly on Fridays, will thus have its final moved from May 17th to May 21st as it plays out the final five episodes of its season. Dateline will replace Grimm in its slot beginning April 26th, while the fate of the remaining episodes of Ready for Love has yet to be revealed.

On May 1st, NBC will be airing a special one-hour episode of The Voice on Wednesday at 8:00, something that could damage American Idol and boost Law & Order: SVU and Chicago Fire. The show has aired sporadic Wednesday episodes during its last two seasons, notably stunting The X Factor when the two matched up this past fall. The May 2nd episode of The Office has also been expanded to an hour, airing from 8:30 to 9:30; in the episode, titled “Livin’ the Dream”, Andy quits his job, Dwight receives his black belt, and Jim returns to Scranton to spend more time with Pam.

Lastly, Smash has returned to its Saturdays at 9:00 slot after shifting to 8:00 on April 13th. The show is set to air at 8:00 tonight before sliding back to the 9:00 slot on April 27th. No reason was given for the decision. The next episode of the musical drama, currently in burn-off mode after premiering this season to disastrous ratings, takes place during Bombshell‘s opening night.

The moves follow the announcement that the fourth episode of Hannibal, originally scheduled to air this coming Thursday, would not be seen by U.S. audiences due to the tragedy in Boston. The show will be airing its fifth episode instead, while a clips package featuring the scenes of character development from episode four hits the internet next week.

Was Grimm the show that should have received the post-Voice slot? Will you miss The Office when it signs off on May 16th? Are you still watching Smash?