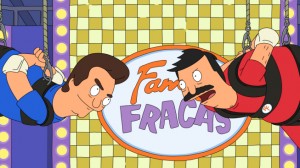 While getting ready to leave for a movie, the Belchers’ car doesn’t seem to want to start, drawing Jimmy Pesto over to make fun of the family’s financial situation. Bob eventually gets the thing to start, but at a red light, it gives out once again, forcing them to leave it behind and walk to their destination. It’s then that they’re given a flyer for Family Fracas, a family game show that’s having a free taping nearby. In line, the Belchers run into Chuck Charles, the former morning show host and ex-husband of Pam (from Pam’s Court), who is hosting Family Fracas. As they’re responsible for his ouster, Chuck doesn’t want them to get on the show, but when a family of five has to withdraw from that night’s episode, it’s time for Bob, Linda, Tina, Gene, and Louise to try and win the grand prize minivan that the show offers.

The Belchers end up playing against the O’Donnell family and while Tina’s distraction over the O’Donnell teenage boys loses the first round, the Belchers win the next two to take home an unexpected victory. Louise gets to spin the wheel of fortune and nearly wins her family the minivan, but they have to settle for a five gallon bucket of Fracas Foam, a red substance that gets dumped on the loser of each successive round. However, they get to come back for another round, which they also win and again take home foam for their troubles. The Belchers reel off a total a five victories in a row and each time, they win yet another bucket of foam, narrowly missing the minivan. Their success frustrates Chuck to no end and try as he might, he can’t convince the network executive to kick the family off the show.

However, he has a better plan, as Jimmy Pesto has signed up his family (and bartender) to take on the Belchers. Once again, the game comes down to the final round, a game of human claw where Bob and Jimmy are lowered in a ball pit and have to retrieve a single yellow ball from a container filled with blue balls. They can only use their mouths and their families are in charge of their movement; this is a game that the Belchers are very, very strong at, as it’s helped them stay on the show for this long, but when Chuck starts the round, Jimmy almost immediately grabs the yellow ball, ending their winning streak. To make matters worse, Jimmy wins the minivan and Bob ends up getting pantsed on national television, once the claw became unstuck.

Bob becomes obsessed with the idea that Jimmy cheated and watches the Youtube video of the final round nearly on a loop after having an encounter with Jimmy outside the restaurant. Pesto let it slip that Bob was “destined to lose” and that “Chuck sure knew”, causing the Belcher patriarch to rush down to the studio and claim that something nefarious was going on. Although the executive wouldn’t award him the victory or entertain the idea of going through a real lawsuit, he suggests that Bob take the case to Pam’s Court, which he accepts. Once in court, Bob doesn’t have the evidence to back up his claim, even with Pam not exactly friendly to anything involving Chuck – until, that is, he notices the cameras. Since they’re not turned off during a taping, he suggests that they take a look at the foam cam, a camera mounted above the Family Fracas set, and review the footage from their episode.

Before they can, though, Chuck burns the tape and the case is thrown out.

Additional thoughts and observations:
-“Why don’t you wash your children?!”
-“I’m into weird stuff and foam. Can we go?”
-“Linda, nice to see you dressed again.” “Thank you.”
-“I like horses, music, and boys. Hi, boys.”
-“I sentence you to kiss my ass.”
-“I have to put aside my feelings for you and destroy you.” Competitive Tina is my favorite.
-“Hey, Jimmy Jr., you missed a spot – on your face.”
-“We had a good run and that’s from a kid that hates running.”
-“Psst! Your ass is grass and I’m the mower.”
-Tonight’s opening credit business: The Massogynist, with massages for men.
-As a child of the 90s, I appreciate a good Double Dare homage, so this was a fun episode.
-As someone not a fan of Jimmy Pesto, though, this episode wasn’t as fun as it could have been.
-Louise getting Linda to slap her in the face to pump her up before a game involving fishing giant flies out of a giant bowl of soup – amazing.
-I’m glad they didn’t actually have the video of Bob’s incident go viral.
-Next week on Bob’s Burgers: Left home alone, the kids transform the basement of the restaurant into a casino, only to be caught in the act by Mr. Fischoeder.