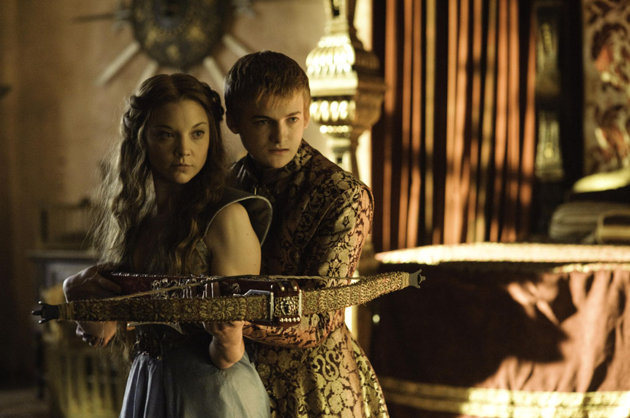 From what I’ve seen of Game of Thrones and read of The Song of Ice and Fire series, the heart of the story has always been the Starks. Tonight’s episode gave us a lot of Stark action, their stories were well done and a long time in coming.

Catching up with Arya and her pals Gendry (bastard so of the late King Robert, something even Joffrey can’t claim) and Hot Pie turned out to be bittersweet. While they took care of themselves with the Brotherhood and held their own, even in a mini sword fight, things could have ended better.

Arya is no longer disguising herself as a boy on the road and that’s rather refreshing. Of course, it wont be long before that’s altogether impossible anyway. She’s a born leader is Arya Stark. When the Brotherhood crossed paths with she and her friends, it wasn’t the king’s son who jumped to confront the visitors, but Arya. She seems, at times, to be frightened of nothing. She is truly her father’s daughter. I loved how she wasn’t afraid for a little sword play to ensure their freedom after their meal, but their was a hint of trepidation when she realized who the hooded man was that was brought in behind her – The Hound.

For as much as he has grown to care for and want to protect her sister, Sansa, the feeling is obviously far from mutual when it comes to Arya as he shouted out her name, damning her to those around them. With the way Game of Thrones tells stories, it could be weeks before we find out what happens to her due to that proclamation!

Sansa thought she was in trouble herself when Ser Loras came to her quarters to invite her to tea with Margaery and her grandmother, Lady Olenna. Unless I’m way off base here, Sansa has found in the Margaery and her grandmother friends and protectors. Lady Olenna is exactly the kind of old woman you’d want in your corner, and it helps to understand where Margaery gets her courage. If anything happened to her, I think Lady Olenna would take down the entire kingdom herself.

Her wisecracking words were full of wisdom and also caring. She felt for Sansa and all that she had suffered, and and also didn’t want to see her granddaughter suffer the same at the hands of Joffrey. I don’t know what she will do to prevent it, but I hope she has a very cunning plan that will leave viewers screaming for more. I no longer fear for Sansa being at King’s Landing with the Tyrells in residence, although I do hope she can remove herself. Sensibly, I don’t see that happening. At least now she may have people to confide in and look our for her.

The way Margaery winds up Joffrey when he starts to get a bit whiny is impressive. She’ll take his mind off of whatever is bothering him by making ludicrous suggestions knowing fully well his hardened and sickening heart will find them appealing, such as the idea of watching her kill something, or someone. Yes, Joffrey would take great pleasure in that, but he’d most likely make someone suffer for it afterward. Might Margaery be able to stop him from doing that, as well? She seems to have a magical way about her. At first I was skeptical about her presence, but now I’m all in. I hope she doesn’t disappoint.

There was another short scene of Robb, still unsure what he’s doing as King of the North. He asks his men if they’ve lost faith in the cause, but truly, I think he’s the one who has lost it. He appears to be doing a lot of nothing. When he received news of River Run and Winterfell, it was his duty to report to Lady Catelyn that Bran and Rickon were not found. I am still paying little mind to Robb and Talisa, but it was to Talisa that Catelyn confessed something very interesting. She carries on her shoulders the weight of all horror that has befallen the family because she was unable to keep her promise to the gods to accept Jon Snow as her own son.

When he was but a baby, he got the pox and she prayed to the gods that if they saved him, she would accept him and love him and beg for Ned to change his name to Stark and he would be raised no differently than any of her other children. Jon would be her own. But when it came down to it, and he was healed, she was unable to keep the promise and for that the Starks have been haunted, all at her hand. I hope that means, somewhere down the line, there will be a reunion between Catelyn and Jon and she will share that story with him, make amends and name him a Stark. Can she do that? I don’t know the rules, but I know because of his hunger for a mother, and his love and respect for Catelyn, that gesture would mean the world to him. It meant the world to me to know that she beats herself up over it now, and still ponders what a huge mistake it was.

So while she was making what looked like a dreamcatcher to pray for Bran and Rickon, the same things she made once for Jon and from which she believes he was saved, Theon was being held captive, while Bran and Rickon were walking free, having escaped the horror of Winterfell despite Theon’s best attempts otherwise. I don’t know who has Theon, but it was so enjoyable watching him being tortured. He’s such a pathetic little man, and now his sister, Yara, will come to free him. Am I crazy to think she’s the one who is holding him in the first place? Testing him to see how big his balls are? It didn’t take much to get him to spill his guts, and tell every truth he knew: how much he hated the Starks, wanted the love of his father, wanted to rule Winterfell for himself. The answers always changed with the turn of the screw, but each held some truth.

The children he was supposed to have killed, Bran and Rickon, were on the road, with Osha and Hodor looking after them, along with Summer and Shaggydog. Oh how I loved seeing so much of the direwolves during the episode! I don’t think we’ve seen so much of them since they were picked up along the road as pups. Bran has grown into quite the warg, seeing through Summer’s eyes on a very frequent basis. He’s never quite sure what is real or what is not, but when he meets a boy that was in his dream in the flesh and Summer lets him pass, he starts to understand the difference. Yes, we’ve finally met Jojen and Mira Reed. Jojen has been seeing Bran his entire life with his warg capabilities, and he will teach Bran what he needs to control it.  I simply can’t wait for that story to continue.

The hour ended with Jaime taunting Brienne again, and it was his undoing. By being an idiot, as he is around her, he not only kind of lost a sword fight to her while she was using only one  hand, but because he was insisting on wasting time and trying to escape a local house rambled by, found the Kingslayer and took him for the reward. I don’t think either of them are in any real danger, but Jaime can be such a pain in the ass, always making things more difficult than they need to be. Now they’ll have to waste more time trying to escape even more people who want his head. Typical Jaime Lannister. Hot bastard that he is.

For the full rundown on what happened during the episode, check out the recap!