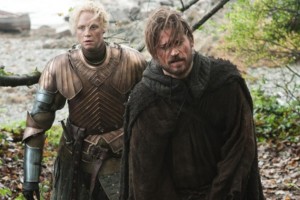 Welcome to the Game of Thrones Recap for Dark Wings, Dark Words. The episode starts out with our first glimpse of Bran, obviously running through his dreams and the eyes of Summer, his direwolf. Robb and Jon are at his side as he practices his marksmanship, the words of Eddard Stark in his mind. He’s attempting to kill a raven, but a boy tells him he cannot kill it because the raven is Bran.

Bran awakens and Hodor, Osha, Summer and Shaggydog are nearby. Osha tells him they need to move because they don’t know who might be after them.

Talisa is next speaking to Robb Stark who is telling him her mother called them grim, stinking barbarians. Robb asks if he ever imagined she would marry one. Lord Bolton arrives with word from River Run and Winterfell.  Robb is speaking with Catelyn about a death, and she is in tears. Robb delivers the news that by the time anyone got to the island it had been torched and Bran and Rickon had not been found. He admits he has not heard anything from Theon to indicate they may be his hostages.

Theon is strung up and being doused with water. He has no idea where he is. When he asks what the man holding him wants, he says he wants to do “this” and puts a spike through his hand.

Jaime is whining that it is taking too much time as Brienne escorts him to King’s Landing over fields. They argue over Lady Starks virtues and then Brienne watches as Jaime takes a pee. It has, apparently, taken this long for them to start talking about how Brienne came to be in the company of Catelyn Stark. Jaime susses out that Brienne ws into Renly, and he breaks the news to her he was into men. Jaime says, “I don’t blame him, and I don’t blame you either. We don’t get to choose who we love.” Wise words from a man of questionable character. A man happens by and Jaime suggests they kill him to get his ride. Brienne refuses to kill an innocent man.

Joffrey is being fitted for a new frock. He doesn’t want flowers and demands new fabrics. Cersei suggests giving the fabric to Margaery for her wedding gown. She asks Joffrey what he thinks of Margaery. Joffrey says she’s an ideal match and that with the Tyrells beside them they will crush the northerners. Cersei notes that her concern for the common people is interesting, and Joffrey says the conversation is becoming boring. Joffrey says intelligent women do what they are told and that is why Margaery married Renly.

Shae and Sansa are talking about Littlefinger. Shae is suspicious of Baelish, but Sansa thinks he is only concerned because of his love for her mother. Ser Loras arrives and asks Sansa to visit with Margaery and her grandmother in the gardens at their invitation. Sansa is presented honorably by Margaery to her grandmother Lady Olenna. Lady Olenna doesn’t believe Joffrey belongs on the throne and says they are there to help get them through the mess, shocking Sansa.

Lady Olenna asks if Sansa has met her son, the Lord of Highgarden. She says he is much like her late husband, an oaf who rode over a cliff while looking up at the sky. She then asks Sansa’s opinion on Joffrey, saying that nobody would know better. She asks if there is truth to the troubling tales she has heard. Lady Olenna does not easily believe what Sansa says and asks if she’s frightened to talk. Sansa says her father always told the truth and Joffrey took his head for it. She said he took her up on the walls and made her look at it. They ask her to speak freely and Sansa says Joffrey is a monster. Sansa begs that the wedding not be stopped, and Olenna says not to fear. Lord Oaf wants Margaery to be queen and so it shall be.

Robb’s army is walking by and Grey Wind stands nearby. Talisa offers assistance to Catelyn, who refuses, saying only a mother could take on the task of making what she was to protect her children. Catelyn tells Talisa a story about asking the gods to take away Jon Snow, and when he got the pox she made him one to save him. She would ask her husband to make him a complete son, call him a Stark and she would love him as his own. She said all the horror that has befallen her family since then is because she was unable to keep her promise to love a motherless child.

Rayder asks if it was hard for Jon to kill the Halfhand. Jon says yes, but Rayder says it won’t be hard for him to kill Jon if he’s untrue even though he likes him. Rayder tells Jon the only way he got all the different clans to march together without killing each other was to that they would all die if they didn’t march south. He told them the truth.

The come upon a warg, who can see through the eyes of animals, and he’s scouting for them. When he comes to, he tells them he saw dead crows.

The Night’s Watch are still marching toward the wall, and someone is taunting Sam calling him Piggy, saying it’s unfair he’s still alive when so many others are dead. Sam falls to his knees and cries that everyone left him when the white walkers came. The admit they did because he’s fat and he’s slow and they didn’t want to die. Mormont forbids Sam to die.

Bran is awoken by Osha and Summer as Osha looks for food. Summer growls menacingly. The boy from Bran’s dreams appears and Osha puts a stake at his neck. His sister comes puts a knife to Osha’s throat. Summer calms at the boys presence and lets him pass. it is Jojen Reed and his sister Mira. He says they have come a long way to find Brandon and they have much farther to go. 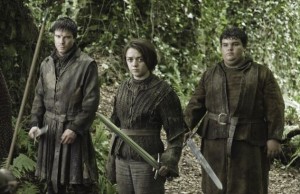 Arya, Gendry and Hot Pie are walking through the woods and Gendry is astounded that Arya didn’t give better name for Jaqen to kill. He says she could have ended the war with her choice. Arya is no longer hiding under the guise of a boy. Men from the Brotherhood find them and want to know how they escaped Harenhall. Great line. “Half the country’s starving and look at this one.” “Maybe he’s the reason half the country is starving.”

Tyrion visits Shae and she tells him she is concerned about Baelish and his interest in Sansa. Shae and Tyrion argue about Ros and although he tells her he has eyes only for Shae she’s angry. It shows how much she cares for him. They begin to make love and he tells her not to come to him again as it’s too dangerous.

Joffrey summons Margaery to ensure she is happy before he leaves on a hunting trip. He begins showing his evil ways to her by taunting her about his sex life. She told him one night Renly suggested something that sounded painful and couldn’t have resulted in children. Margaery shows great interest in Joffery’s pursuits. He asks her if she could kill. She asks if he thinks she could and he says yes, and he would like to watch her.

We switch back to Theon being drawn and quartered. Someone is asking why he took Winterfell. He says to hold it and rule it, until he is pulled again and says he did it to bring glory to his house and his father. Then, he took it because he hated the Starks for holding them and he wanted to hurt them. A hood is tossed over his head and he is pulled even further. He begs for the hood to be removed and in return he would say anything. His sister has sent a man to come for him, and removes the hood, saying he will be back.

Bran, Rickon, Summer, Shaggydog, Jojen and the gang are walking along a path. Jojen tells Bran he is a warg and that someday he will be able to control his entry into Summer. He mentions the three-eyed raven. He asks if Bran has forgotten that they have seen it together. Bran says he dreamed it when his father died, and Jojen said he didn’t dream it, he saw it, as did Bran. Jojen says their fathers were friends. Jojen has spent his life seeing Bran.

Arya, friend and the Brotherhood are eating at a pub. Arya takes on one o the men with her sword. She didn’t expect they would let her go, but they kept their word. When Arya turned around, they had the Hound and he asked “what in seven hells are you doing with the Stark bitch?”

Jaime and Brienne come to a bridge and as they decide whether to cross, Jaime continues to nag at her. In the middle of the bridge he decides to rest and cuts himself free. They begin a sword fight. Jaime is without armor and taunting Brienne while she is far more skilled than he imagined. With one hand, she knocks him to the ground and they are approached by a house of men who want to capture Jaime for themselves.