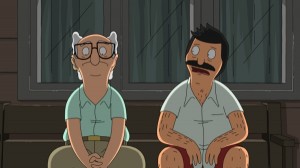 With the restaurant being closed for fumigation, the Belcher family decide to go to Florida to visit Linda’s parents Gloria and Al at the retirement community they just moved into. However, once they arrive in the Sunshine State, it’s obvious that Gloria is quite uncomfortable in having her daughter there with her; she tries to guide Linda toward all the activities offered to keep her away from the potluck that’s happening that evening. Linda and Bob agree to go to a wine tasting that afternoon where he figures out the truth about the community: it’s populated by swingers.

While Bob is amused beyond belief, Linda’s grossed out by the thought of her parents being passed around the center like playthings. Even once Gloria explained how the other centers they thought about living at were full of people waiting to die rather than the lively bunch they currently live with, Linda holds steadfast to her idea that they live in a disgusting place. She has to think about her position once Gloria and Al receive a Notice of Failure to Perform, indicating that they’ve failed to participate in the community’s carnal activities three different times. They now have no place to live thanks to Al getting cold feet, but Linda jumps in immediately to offer her home to them. Bob then decides to bring Gloria and Al together and coax them into attending the next party so they can keep their place at the center.

Al relays to him insecurities about his performance ability and confesses his one sexual kink to Bob: balloons. He likes to watch a woman blow up a balloon and sit on it until it pops. However, since Gloria hates loud noises, he’s never been able to do it in real life, relying on the internet to fulfill his desires. Bob talks Gloria into attending the party and participating in Al’s kink and the two head off together. Linda is, of course, upset at the thought of her parents participating; that is, until she spies them kissing for the first time in two decades, thanks to the freedom they have at the community and the trust needed to explore sexually.

Linda decides that she’s okay with her parents doing what they’re doing and the family drives back home to their real lives.

Snake It to the Limit
While the kids arrived at a time when the pool was closed for cleaning, they get an adventure they didn’t expect through their meeting with Helen Kellerman, a woman the rest of the center thinks is insane. But she’s not actually insane; she’s mourning the loss of her dog Bitsy to a python. Helen offers the kids $100 to go into the woods by the parking lot and locate the snake so that the other members of the community know of its existence, but upon watching snake videos on Youtube, Gene gets anxious and decides not to go searching for the animal. They get their tent up and Tina and Louise go out exploring, leaving him balled up in a sleeping bag and nervously awaiting their return.

The girls encounter bats and a feather/scorpion before falling into a mud pit and sinking down. They hang on to nearby tree branches and contact Gene through their walkie talkies, hoping that he’ll come and save them so they still have a shot at the $100. Just when they think that they’re about to go completely under, Gene comes storming in on a golf cart and rescues the both of them, stating that he doesn’t want to be an only child because they’re weird. The kids then see the tutu that Bitsy was wearing in the photo that Helen had of him in the parking lot on a hollow log, meaning that he’s nearby. Only a second later they hear a nearby rustling and see the dog pop up from the bushes, as happy as could be.

Helen is ecstatic to have her pet back, but just as she was going to put another outfit on it, he runs back into the woods. Not even the song that Helen wrote for him can get him to come out. But why did he retreat that quickly? Was Helen that bad an owner?

Not quite. The dog had fallen in love…with a python.

And the two lived happily ever after in that same hollow log.

Additional thoughts and observations:
-“I went down backwards. No I didn’t.”
-“Ear infection, here we come.”
-“I’m too young to be an outline in a snake’s belly!”
-“Activate spellcheck. Go. I’m in.”
-“Send me a picture of you in the mud holding today’s newspaper.”
-“Guess who’s been talking to Al about sex parties?”
-Although I liked Linda’s song about going to Florida, Gene’s about what he was afraid of was delightful. To sum up, he’s not afraid of cancer – he’s just afraid of snakes.
-Gene suggests they go to Cuba to find a pool and Tina agrees, as she’s always wanted to see the Bay of Pigs. It sounds cute.
-I loved Louise’s ecstatic reaction to Helen offering the reward; she promises to capture the snake cheating on his wife, shoplifting from the snake mall, and giving up on his dreams, all on camera.
-Gene’s hacker name: Circuit Breaker.
-I don’t know about you, but I’d watch 138 seasons of Snake It to the Limit. So You Think You Can Snake? 102.
-I’ve heard of many, many unusual sexual fetishes in my day, but safe to say, I had never heard of someone liking what Al likes before. Good job, Bob’s Burgers.
-I thought this was a good-not-great episode…until the ending, which was adorably silly and something only this show could pull off.
-Louise’s final words are that nobody gets anything and everything is left to her ghost. Smart.